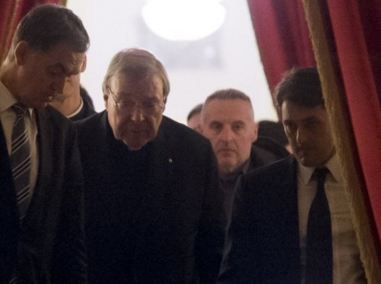 The Australian Church made “enormous mistakes” in its handling of paedophilia, Cardinal George Pell has told the royal commission into child abuse.

Speaking via video link from Rome, the cardinal said the Church had previously had a “predisposition not to believe” reports of abuse by priests.

“The instinct was more to protect the institution, the community of the Church, from shame,” the prefect of the Vatican Secretariat for the Economy said.

“The Church has made enormous mistakes and is working to remedy those but the Church in many places, certainly in Australia, has mucked things up, has let people down,” he added.

Cardinal Pell admitted that he himself had given some priests the benefit of the doubt. “I must say, in those days, if a priest denied such activity, I was very strongly inclined to accept the denial,” he said.

The cardinal is not facing criminal charges, but has been accused of turning a blind eye to known clerical abuse. He denies the allegations.

The inquiry asked Cardinal Pell about his knowledge of several abuse cases from the 1970s and 1980s, including that of Fr Gerald Ridsdale, a priest who committed more than 130 offences against young boys while working at Ballarat’s St Alipius school. The cardinal said he had heard “no rumours of sexual misconduct” at the time.

Last week, the cardinal called for an inquiry into the leak of “utterly false” claims that he was under investigation for child abuse.

The royal commission was set up in 2012 and Cardinal Pell has testified before it twice previously over matters not connected to Ballarat.

Last night’s questioning, which lasted for four hours, was the first of four days on which Cardinal Pell will speak to the commission for his latest round of evidence. The inquiry is scheduled to continue until July.

Cardinal Pell was given dispensation to give evidence by video link to the commission in Sydney from a Rome hotel after he was deemed too ill to fly by doctors. The 74-year-old has a heart condition.

Meanwhile, Cardinal Pell has denied that private security guards protecting him as he arrived at the hotel were involved in a scuffle with waiting members of the media.

A reporter and cameramen were allegedly pushed by security guards, but a statement released by the cardinal’s office said Italian police are “in charge of security outside and inside the hotel where the hearing is taking place”.

“The incident did not involve Cardinal Pell’s security as it has been reported,” it said, before adding that the cardinal had heard that a reporter and cameraman had been “treated unnecessarily roughly and were pushed and shoved”.

“Just before giving evidence Cardinal Pell asked a member of his team to contact the reporter to check on his well being,” the statement said.

On the weekend, Cardinal Pell visited the Our Lady of Lourdes Grotto in the Vatican Gardens to pray for all survivors of abuse, according to Vatican Radio.

Cardinal Pell also offered his support for the Loud Fence movement by tying a yellow ribbon on the grotto’s fence, according to Vatican Radio.

Started in Australia, the Loud Fence movement involves people tying ribbons on the fences of Catholic institutions to show solidarity with survivors of abuse.

“I am aware of the Loud Fence movement and how it has grown rapidly. This is my gesture of support, especially for the people of Ballarat,” Cardinal Pell said.

“I think this is an entirely appropriate place to place a ribbon of support and prayed for all survivors of abuse here. I hope the coming days will eventually lead to healing for everyone.”