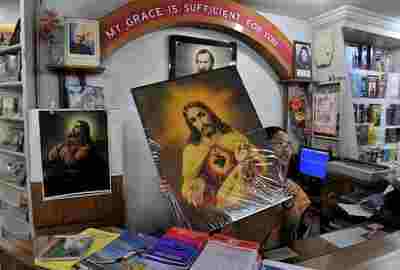 View of Christ as a Hindu is fantasy, clerics say ahead of reprint of nationalist author's work.

Church leaders in India have downplayed the reprinting of a controversial book that claims Jesus was a Hindu from the southern Indian state of Tamil Nadu, calling it "nonsensical."

The book — Christ Parichay (Introduction to Christ) — written in the local Marathi language is scheduled to go on sale in Mumbai on Feb. 26, 70 years after it was first released in 1946.

Written by Ganesh Damodar Savarakar, one of the founders of the nationalist Hindu group, Rashtriya Swayamsevak Sangh, the book claims Jesus was a Tamil Hindu whose real name was Keshao Krishna.

The book also said Christianity is a Hindu cult and that after being crucified Jesus went to Kashmir in northern India and established a monastery before leaving his physical body at the age of 49.

It also states that the present-day Palestianian and Arab territories were Hindu land.

Ranjit Savarakar, grandson of the author and chairman of the Savarakar national memorial, which is republishing the book, told ucanews.com that it is one of several out of print titles written by his grandfather.

No offense to Christians is intended, he said.

"We are re-launching seven other books written by my grandfather, which are not available now along with this one," he added.

Church leaders called it another "ploy" by the Hindu organization to create controversy.

They pointed to the book being written by a founding member of a Hindu group that has been accused of formenting anti-Christian violence in India and also trying to carve out a Hindu nation.

"The book is just one person's fantasy which has no scientific basis, no rational explanation and no proof that can support it. It would basically be a book that would be ignored," Father Nigel Barrett, spokesman for the Bombay Archdiocese, told ucanews.com.

"We know this move is not going to affect our faith in any way. This is a move in keeping with the current trend of intolerance in this country."

If according to the book, Christ was a Hindu, "then why does the RSS has so many issues with people converting to Christianity?" Father Barrett said.

Father Gyanprakash Topno, spokesman of the Catholic Bishops' Conference of India, called the book "nonsensical and funny," adding that there was no need to pay any attention to such things.

"People like fantasies and write about a lot of things but the truth still remains," he said.