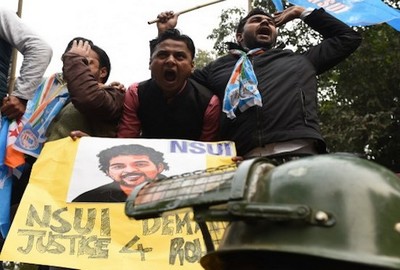 In the pic: Indian students shout slogans in New Delhi on Jan. 19 as they protest the suicide of Ph.D. student Rohit Vemula. (Photo Sajjad Hussain/AFP)

Shame for country that casteism took the life of a dalit scholar, say Catholic bishops.

New Delhi: (UCAN) Church leaders in India have condemned circumstances behind the suicide of a dalit research scholar, blaming the tragedy on caste discrimination existing in the country.
The India Catholic bishop's Office for Scheduled Caste and Scheduled Tribes that works for the overall development of dalits, indigenous people and marginalized classes, said caste discrimination drove Ph.D. student Rohith Vermula to hang himself at Hyderabad Central University in southern India Jan. 17.
"It is a shame for our democratic country that casteism took the life of a dalit scholar whose education could not save his dignity," the bishops said in their statement.
Universities should promote values of equality but India's educational institutions do not provide dalits with equal opportunities and deprives them of their basic rights, it said.
Samuel Jaikumar of the National Council of Churches in India said what occurred is simply an issue of intolerance in the country, made worse by "the government's policy of intolerance against minorities" such as Christians and Muslims and dalits.

The suicide
Vermula committed suicide not long after he and four other dalit students were suspended by authorities and barred from the hostel they were living in. The students were suspended for allegedly attacking a leader of the Akhil Bharatiya Vidyarthi Parishad (All India students' council), the student wing of the pro-Hindu Bharatiya Janata Party (Indian people's party) that runs the federal government. The students deny the allegations.
Prior to this, the university had reportedly withheld Vermula's fellowship money for seven months.
The 26-year-old's death led to protests by students across the country.

Oppression of the dalits
There are approximately 167 million dalits in India. The four-tier caste system in India comprises Brahmins (priests, teachers), Kshatriyas (kings, warriors) and Vaishyas (merchants, artisans). The Sudras (laborers, peasants) make up the lowest caste.
Those not born into these four castes were the outcasts (formerly untouchables) who are now called dalits, a Sanskrit term meaning "trampled upon." They are often the target of disempowerment, oppression and persecution despite the Indian constitution abolishing caste discrimination and laws making “untouchability” a punishable offence.
The dalit community has always been oppressed and is not psychologically strong to stand the pressure. This is what happened in the case of Rohith Vermula," said Father Z. Devasagayaraj, secretary of India bishops' Office for Scheduled Caste and Scheduled Tribes. The term "Scheduled Caste" and "Scheduled Tribes" are administrative concepts.
Even today, higher caste people believe that it is not acceptable for the dalit community to have a good education and a decent standard of living, he added.
"If the dalits improve their status with education and good jobs, it will shake the caste hierarchy. This is unacceptable for higher caste people who do not want them to come up in life," he said.