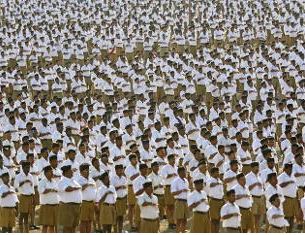 New Delhi (Matters India): The creation of a proposed Christian wing of the RSS is splitting the Indian church wide open.

The Catholic Bishops’ Conference of India (CBCI) has refused to participate in a meeting being organised by the John Dayal-led United Christian Forum (UCF) here on February 13 to discuss the move.

The RSS has been holding a series of meetings with Christian leaders to reach out to the community by setting up the Rashtriya Isai Manch on the lines of the Muslim Rashtriya Manch, established over a decade ago.

CBCI spokesperson Father Gyanprakah Topno said, “We are yet to get any official invite from the RSS. Then why should we discuss it prematurely?’’

However, many independent Christian bodies, priests and Bishops, mostly from the Northern church, have said yes.

“It is up to the CBCI to decide on attending our function, which will have representation of over 150 representatives from all denominations, ’’ said A C Michael, one of the organisers, The Indian Express reported.

Sources said the elitist Catholics are not keen on the initiative. “But many priests and bishops from the northern belt in the country have agreed to attend. The church in North India may be poor in resources but are high in Christian spirit,’’ he said.

Justifying this claim, Father Savari Muthu of Delhi Arch Diocese told The Sunday Standard that he would be attending though he is aware of the CBCI position. According to a radical insider within the CBCI, the difference over approach to RSS is nothing but a “class war’’ within the church.

“The majority of Christians in India are poor and insecure. The northern church, which represents them is more concerned about this political development. The CBCI is under the control of the Brahminical Christians from Kerala. They do not want to be seen with Dalits and adivasis who will discuss political issues,’’ he said.

Organisers confided that the CBCI is abstaining as the cardinals will have to face some unconfortable questions about their recent bonhomie with the RSS.

The topics of discussion for the meeting include ‘Should there be a dialogue with non-state actors like RSS’ and ‘Who is the margdarshak for Church and Indian Christians?’

Christian activists name the current divide as a tussle between the elitist Kerala church versus the rest of the Indian churches. “The Kandhamal incident may not mean anything to upper caste Kerala Christians but is very much fresh in the memory of every northern Christian. We can’t think of joining hands with RSS,’’ an activist said.

This criticism against Kerala church comes amidst news of a meeting lined up between BJP president Amit Shah and Kerala Congress leader K M Mani next week. Mani, whose Keralka Congress is a Catholic party will not make any moves without the approval of the Catholic Church. Sources speculate that Mani’s son, Jose K Mani MP is likely to be inducted into the Union ministry.