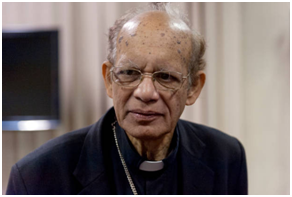 The three week Amazone Synod from  Oct. 6 to 27 will conclude soon this week and Cardinal Gracias of India' is the only Asian representative at the synod.

Not to disappoint any of us the following is what he told the American Jesuit Magazine in an exclusive interview on Oct. 19 at the Amazon Synod:

The Indian Cardinal said: “I see that what’s happening [in the Amazon region] is really a world wide phenomenon of disgracing [indigenous] people, taking their land.”

Three main issues have emerged during the first two weeks of the Synod of Bishops for the Pan-Amazonian region: 1.violence against the indigenous peoples, 2.climate change and 3.the shortage of priests. “We must give answers to each of them in our final document,” he added.

In “the cry of the indigenous people,” he understood the synod’s relevance to India. In India, he said, “we have the ‘tribals’ and the ‘Adivasis,’ as indigenous peoples in India are known, but “what struck me now is that we never really bothered about protecting their culture. Here I see the Amazonians are so fierce about protecting their culture, but in India we are not, and maybe their culture too will disappear, so maybe we should study that and see how it should be preserved.”

The question is what he means by ‘We’? The whole Church which includes all people of God including the  baptized laity or the hierarchical class infected with the cancer of CLERICALISM, to use Pope Francis’ oft-repeated pet word.

For JESUS the people of God is every human, man or woman, baptized or ‘pagan’, believer or unbeliever. Even in Catholic theological perspective, a parish priest or bishop is to serve, not just the baptized but the entire people living in the area of his jurisdiction without distinction.

Clergy-laity divide is Church-made, and believer or unbeliever is man-made, not made by Jesus. For Him what counts is equally of one’s worth and dignity as a Human being. It is for this reason alone, Jesus presents himself as the SON OF MAN (the ideal human) 85 times in the Gospels.

And what did Jesus do? He mingled and supped with the outcastes, the drunkards, prostitutes and those at the lowest strata of society, the last, least and lost. Hence the CCV’s repeated stress on the “CATTLE CLASS”. Both the Pope and the Prostitute are equally children of God, if there is a God! Have to be!

So Church’s 1st duty is to identify with the ‘poor’ like Jesus, not with the Royal class of Constantine. Has not the Episcopal Class heard nothing of the scourge of CASTE SYSTEM ruling the roost in India in selection of Bishops and appointments to key positions in the Church of the Bhraminical mentality? “Oh tempora, oh Mores!” In what  times are we living?

The Indian Cardinal, mentioned places like Ranchi, where the Tribals “are losing their land and they’re complaining about that… What’s happening in Amazonia, in a smaller scale, is what’s happening there in Ranchi, and therefore we cannot any more ignore this.” Cardinal Gracias concluded, “I think that Amazonia has much to teach India, and the synod repercussions are worldwide.”

Frankly speaking, we would rather say ‘in larger sacle’ Caste system has simply eaten up the very vitals of the thinking system of the Clerical class. Concerned persons, belonging to Christian and non-Christians have written volumes on this issue. Are the clerical class seeing or listening, instead of just preaching only without listening?

Perhaps India’s laity synod, sponsored by the CCRI, due in Feb. 2020, in Kerala, Hosanna Mount, Bharananganam, near Palai, it is fondly hoped, will open the blind eyes and deaf ears of the ‘clerical class’ which prides itself as the Catholic Church in India. Recall also what we termed ‘CATHOLIC’ is an Oxymoron. james kottoor, editor CCV.