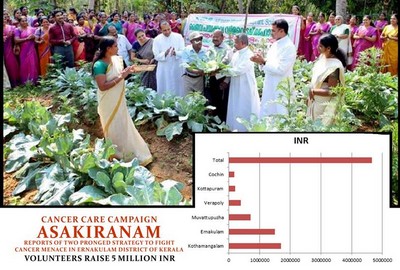 A group of over 300 volunteers from six dioceses in the Ernakulam district identified the cases in by way of 12 cancer early detection camps.

An awareness campaign Church groups conducted in Kerala's Ernakulum district has identified over 600 cancer cases that experts suspect is caused by toxics in fruits and vegetables bought from market.

A group of over 300 volunteers from six dioceses in the Ernakulam district identified the cases in by way of 12 cancer early detection camps.

The program was part of the Cancer Care Campaign that Caritas India, the social action wing of the Indian bishops, piloted in Kerala. The Caritas program locally called Asakiranam (ray of hope) was started last March.

The campaign was started after reports said 80 percent patients consult doctors at a stage when recovery is rare and can be termed as case of “late detection’. The Caritas campaign tries to help people detect the killer disease early and fight it successfully.

Doctor Haridas, south zonal manager of Caritas India, who heads the campaign said the program takes a "serious look at lifestyles" as more than half of cancer cases are reportedly caused by "life style choices," according to a WHO report.

While early detention is the primary step in fighting the disease, the second most important strategy should be developing family farming and kitchen gardens to lessen dependence on the market.

"However small, locally grown food can cut down on the cancer toxic rampant in the food market as result of globalization," he said.

With an aim to promote family farming, the campaign also distributed more than 100,000 seed packets and seedlings besides 5 to 25 grow bags to 887 families. In the past oneyear of campaign 7,050 families have taken family farming seriously, Das said.

According to a report released by experts this year, India has an increasing burden of 700,000 new cancer cases a year adding to the existing 2.4 million cases. The campaign also collected 5 million rupees to help cancer patients.

The program, a pilot, was launched in Ernakulam on March 8 last year. It is being implemented with six member organizations in the dioceses of Kochi, Verapoly, Kottapuram, Ernakulum, Kothamangalam and Muvatupuzha and with the help of the two major Catholic hospitals–Lourdes and Lisie.