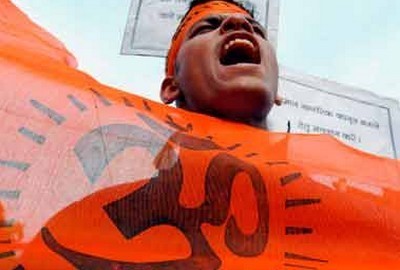 Shukla said his organization would give awards and protection to Hindu youths who attack churches and marry Muslim girls.

Mahasabha on Monday said attacking a church is not “illegal” and “violates no law,” the Hindu newspaper reported.

“The Narendra Modi-led NDA government should award and provide legal and administrative protection to Hindus who attack churches across the country," Shukla reportedly said.

"Churches are no longer places of worship but factories for conversion of Hindus into Christianity,” he said according to a report in the paper.

Shukla said his organization would give awards and protection for Hindu youths who attack churches and marry Muslim girls.

He also said the Taj Mahal was a Shiva temple and not a mausoleum and would meet the same fate as the Babri Masjid.

Last month an Agra court admitted a petition by six lawyers, affiliated to the RSS, seeking to declare the Taj Mahal a Shiva temple.

The court issued notices to the Union Home Secretary, the Union Ministry of Culture and the Archaeological Survey of India, asking them to file a reply by May 6. The next date of hearing in the case is on May 13, the report said.