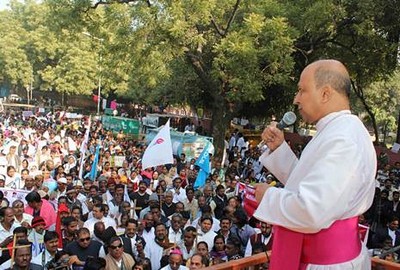 The statement was signed by Archbishop Anil Couto of Delhi and other Catholic, Orthodox, Protestant Bishops and civil society leaders.
India:

Bishops and Christian leaders India say they celebrate Christmas this year with "a heavy heart" because of the violence against Christians in various parts of the country.

The leaders of various denominations said in a statement in Delhi that attacks against their people have increased across the country, especially in the states of "Chhattisgarh, Madhya Pradesh, Odisha, Uttar Pradesh and now in the territory of the capital city Delhi.”

Archbishop Anil Couto of Delhi signed the statement along with and other Catholic, Orthodox, Protestant Bishops and civil society leaders.

“The demolition of Saint Sebastian's church in Delhi, as well as other incidents of targeted violence, show contempt not only towards the religious feelings of our community, but also for the protection guaranteed in the Constitution of India," the Christian leaders said.

They explained that these acts of violence are not isolated incidents, but part of a series of interconnected actions by various non-state actors. "Many politicians have called for national laws against conversion, measures that affect the Christian and Muslim communities, although not mentioned."

"The well organized campaign, also by senior members of Parliament belonging to the ruling party, is a threat to peace and national harmony and calls into question the identity and patriotism of different religious minorities in India", discrediting and exposing them to further violence.

The statement said, "While the government won the election by presenting a platform of 'development and good governance', radical groups see their program of hatred and religious nationalism approved. It is a blatant attempt to sabotage the Indian Constitution, which guarantees freedom of every Indian citizen to profess, practice and propagate their religion."

The leaders noted that the measures, paradoxically called "Laws for religious freedom", in force in several Indian states, have been in fact limited and "have been used against minorities, giving police the power to disrupt, arrest and punish priests, religious and church operators".

The Bishops have sent a memorandum to the government that lists various "representative episodes of hostility and discrimination suffered by Christians throughout India". They report cases of "social boycott" (some Christian missionaries are denied entry in over 50 villages in the region of Bastar in Chhattisgarh, and some Christian families in Orissa are not allowed to use the public well in the village); physical aggression in many states; desecration of religious buildings.

The statement concluded reminding that India’s founders were committed to ensure that the rights of all are protected regardless of religion, gender or caste and hoping that a strong political will of civil and political institutions would stop this discrimination and targeted violence.