The Catholic Bishops’ Conference of India (CBCI) invited Sri Venkaiah Naidu, Vice President of India, for its annual Christmas celebration held at the Community Centre near the Sacred Heart Cathedral, New Delhi, on the 12th December. It was hosted by Bishop Theodore Mascarenhas, Secretary General of the CBCI. Among the red-sashed ambassadors for Christ (the hierarchy) and a variety of Ambassadors from the diplomatic corps, an obsolete Ambassador car like me was also invited by Bishop Theodore.

I was invited the previous Christmas too, but could not make it because of the dense fog and cancellation of trains. So this year I was determined to accept the kind invitation, despite a journey of 500 kms each way. It is not often that I get invited by bishops! So I felt duty bound to attend.

Frankly speaking, I was disappointed with the programme. It was so much like a convent annual concert, with affected accents, bright lipstick and garish stage settings. (I also avoid such concerts, but our bishops seem to enjoy attending them as chief guests). I was in two minds about writing a critique of a gracious host; though an editor of a prominent weekly did ask me to file a report. It would not be biting the hand that fed me, but possibly hurting the man who so kindly invited me.

Human respect prevailed over reason, and I decided not to write. Matters India, whose editor Jose Kavi was there, had already published a detailed report on the 13th morning, quoting the Vice President, as also Cardinal Cleemis, the CBCI President. So was there need for me to dip my pen in acid to write a critique? When I read the scornful and acerbic comments on the event in response to the Matters India story, the journalist in me prevailed over personal relations. I hope my host will pardon me for what follows.

Christmas is about poverty, deprivation, rejection, persecution and vulnerability; midst the proclamation of peace and salvation. If we miss the centrality of Christmas, then we end up having a concert, with make up on our faces, but flak and mud to follow.

First the stage. It had a huge picture of a reindeer and sleigh on one side, and a pot bellied Santa on the other. 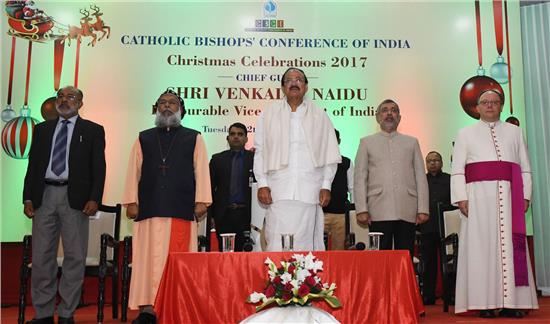 Oh yes, there was a scene of the manger, but it got hidden behind the chairs of the “dignitaries”. Then the choir. Can you imagine Silent Night being accompanied by kettle drums? The choir was from an elite convent school. The carols were in English, but one in affected Hindi. Was this what prompted the Vice President to quip that we should not forget our mother tongue? This was a CBCI event, not a convent concert. Where was the rich cultural diversity of Christians in India? There are thousands of Punjabi, Malayali and Adivasi Catholics in Delhi. Would not diverse choirs and bhajan mandalis have been a better Christian witness? Was this celebration meant to be a witness of crib and cross, or was it a crass exhibition? Going by responses to the Matters India story, the Christian community is not impressed. Was the VIP VP impressed? I doubt it. And what was the role of the diplomats?

In my hometown the Kanpur Catholic Association has often organised a Christmas Milan. We do have a chief guest. But we invite choirs from different churches, not just Catholic. We have multi-religious prayer for peace. To emphasise the core message of peace we also use the occasion to present Peace Awards to those who have promoted peace and communal harmony. This does not require much imagination or expenditure. But it has powerful witness value. Next Christmas I hope that the CBCI will organise a Milan in the Sacred Heart Cathedral next door, and not in a community hall; bearing true witness to the Christmas message and the diversity of Christianity in India.

I have a few more observations. Cardinal Cleemis did well to tell the VP that the recent cyclone Ochki in Kerala and Tamilnadu should be treated as a national disaster. The VP had arrived 5 minutes early, preceded by the unassuming Justice Kurian Joseph of the Supreme Court and Congress spokesperson Tom Vadakkan. But KJ Alphons, the “Christian face” of the BJP Govt, arrived 20 minutes late, as did most of the undiplomatic diplomats. Cleemis was at the mike when Alphons walked in. The cardinal was diplomatic when he welcomed the Minister saying – you were not late, we were on time!

Coming back to the Minister, he was swarmed by selfie seeking admirers from his home State, during the fellowship and tea that followed. How servile or opportunistic can we get? I was chatting with Dr Suresh Mathew ofm cap, the young and zealous editor of Indian Currents, Jose Kavi, the veteran editor of Matters India, and Anto Akkara of ENI News, who has almost single-handedly espoused the cause of the long suffering Christians of Kandhamal, Odisha. Anto was ruing that the bishops and priests of Kerala seemed lukewarm to the cause. Wicked as I am, I quickly said, “Teach them to talk in Malayalam, and their voice will be heard in the holy Catholic Church”.

Just then we espied Alphons near us. Anto, the inveterate journalist was not going to miss the opportunity; and I the shutterbug was not going to miss what was to transpire either. Anto introduced himself to Alphons, who seemed to know him. We may recall that Alphons had recently stated that the Christians in India are safe, and nobody is troubling them. So Anto presented the Minister his book “Who Killed Swami Laxmananad?” Its sub title is “Shocking Revelations of Himalayan Fraud and Travesty of Justice in Kandhamal”. Anto told Alphons about the seven poor Christians who have been languishing in jail for the last seven years. He avers that they have been framed in the murder of Laxmananada, and their case is not coming up for hearing in the High Court. Alphons said that he was not aware of the case!

Even though I felt that the event was more like a concert, I hope that at least two concerns will reach the ears of the powers that be – the plight of hundreds of Christian fishermen lost in the sea during cyclone Ochki, and the poor Christians languishing in jail in Odisha. If these two concerns are addressed then this effort would not have been in vain.

Let us wish the bereaved and suffering the hope of a Christmas dawn, and pray that those who are in their comfort zones will come out of their inns to experience the stark reality of the manger. A blessed Christmas to all!

(The writer is President of the Kanpur Catholic Association).