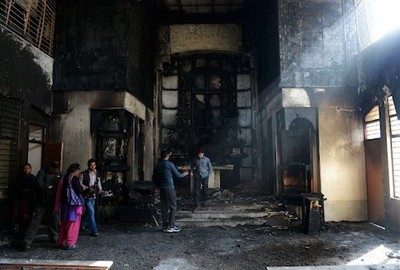 Indian Prime Minister Narender Modi is coming under fire from Christian leaders and the opposition Congress Party for not condemning several recent attacks on churches in New Delhi.
In the latest incident — the fourth in less than two months — a Marian grotto at a parish church was found vandalized on Wednesday.
CCTV footage showed two people arriving on a motorbike and one of them breaking glass in the grotto, said Father Savarimuthu Shankar, Delhi archdiocese spokesman.
Church leaders say they see a pattern in the attacks and suspect members of the Rashtriya Swayamsevak Sangh (RSS), an umbrella group for Hindu hardliners and the political wing of Modi's Bharatiya Janata Party (BJP).
"These are not isolated events. It is the fourth attack on a church in Delhi archdiocese since December 1," Father Shankar said.
Such attacks on Christians have increased ever since Modi came to power last May, he added.
Modi's political opponents say Hindu hardliners, who are pushing for a Hindu-only India, are emboldened by the BJP's election victory.
Despite media reporting on several attacks, Modi has not made any public statement condemning them.
"The prime minister owes an answer to all…. In fact his silence is eloquent and disturbing," opposition Congress Party spokesman Abhishek Singhvi told ucanews.com on Wednesday.
He said Hindu hardliners are "deliberately and consistently" trying to lead the country toward polarization, especially with state elections due in Delhi next month.
According to John Dayal, a lay Catholic leader, "a political attempt at polarization of the people would be the first explanation as to why these incidents are taking place”.
Dayal, also a member of the National Integration Council, questioned Modi's silence on the attacks. He said although Modi has assured security to the minority Christian community, he has yet to take action to stop hate campaigns and comments by right-wing activists.
“I still feel the prime minister must openly denounce such attacks on religious minorities and denounce those involved … even if they belong to his own Sangh Parivar [clan of pro-Hindu groups],” he added.
However, Hindu groups say "it is not fair" to blame them for the incidents.
"These are small and isolated incidents … essentially related to a law and order issue. We would appreciate it if law enforcement agencies take prompt and timely actions. We would also appreciate if people also have faith in the law enforcement agencies," RSS leader Pradip Joshi told ucanews.com.
"We do not endorse any act of vandalism and it will not be fair to put blame on organizations or individuals if some individuals have been found involved in some incidents,” said BJP leader, Ravinder Kapur, echoing the same view.
Protestant leaders say a Modi denouncement of the attacks would ease the situation.
“The silence of the prime minister encourages those forces which want to create tension in society. Attacks even on places of worship are not taken seriously,” Samuel Jaykumar of the National Council of Churches in India, told ucanews.com.
He said the attitude of the federal government toward these incidents is making the Christian community feel unsafe.
Father Shankar said an ecumenical group including three bishops met with Modi around Christmas and the prime minister "refused to make a statement about attacks on Christians".
Modi told them the reported attacks were "media hype" to counter his "development agenda," Father Shankar said.
Prior to Wednesday's incident, a mysterious fire gutted a church on December 1, while stones were thrown at another church two weeks later. Over Christmas, a Nativity scene at a parish church was also set on fire.