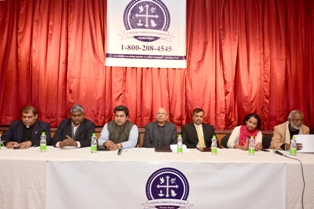 New Delhi: Amid burning of churches and flickering embers, Christians of all denominations united to launch a joint front and a national helpline to help face targeted violence.

The United Christian Forum (UCF) and a toll-free round-the-clock helpline — 1-800-208-4545 — were launched Monday at the national capital.

The Forum has been created to coordinate legal and advocacy assistance to the community, traumatized in recent months by communal violence in several states.

An over-200 strong gathering, including all major denominational and non-denominational groups, applauded as the all India helpline was made functional at the YWCA auditorium at Jai Singh Road.

“Uniting under one banner with the power of prayer and Constitutional guarantees as rearguard, we hope to overcome the evil of increased targeted violence against our community,” said UCF president Michael Williams.

The helpline is to extend an ear and helping hand to those who are being threatened, tormented or in need of help be they in the forests of Kandhamal or remote northeastern areas, he said.

The initial days of Kandhamal violence in 2008 went unreported. The watered-down version of the incidents came to light only after violence had flared up. More than 100 people were killed, 300 churches burnt and over 6,000 Christian houses torched.

Dr Williams, who is also the Dean of Mount Carmel Schools, said what is unique about the helpline is that the person who responds to the call in Delhi or elsewhere not only listens to the grievance but also prays for the caller.

The Forum will pursue all such cases with the judicial, political, administrative and police systems. The call would also be recorded and documented.

The 24-hour helpline has been commissioned so that lawyers and experts can assist victims of violence, intimidation, coercion and illegal confinement by any criminal or political group, said Dr John Dayal, spokesperson of the Forum.

Calling on all Church leaders in particular and the media in general to publicize the issue, he said such acts needed to be monitored on a regular basis.

“We are all citizens of this secular nation. It is our duty to uphold the sanctity of the Constitution and not allow any cheap talk to question anyone’s fundamental freedoms,” said Dr Williams.

Pastor Isaac Shaw said in all things God works for the good of mankind. The current crisis following desecration of places of worship has united all the Churches.

He said the decision to form the United Christian Forum was made at the CNI synod and later consented to by other Churches. (The synod is the supreme body that finalizes all matters pertaining to the Church).

It’s God’s decree that all of us “in all things work together for good”, the UCF treasurer and Executive Director Delhi Bible Institute said quoting St Paul’s letter to the Romans (8:28).

Stating that the “blood of saints have irrigated the Church”, he said “let us not get intimidated by ‘Ghar Wapsi’ (recent forced and lured reconversions to Hinduism).

After a brief prayer interjection by Bishop Subodh Mandal, lawyers Pramod Singh and Tehmina Arora spoke on Constitutional guarantees for Minorities and how they were being trampled upon especially after the current BJP dispensation took over.

Tehmina said there was a crying need to help document such violence and create a network to peacefully tackle communal forces. “We need to seek solutions forcefully.”

UCF Secretary Vijayesh Lal stressed on the importance of prayer. He said the God who put the BJP government in the saddle would also provide us the courage to face the anti-Christian tirade by state and non-state actors.

The Churches also decided to engage social media in a big way to spread information and awareness among the people.

After a brief question-answer session, where some individuals demanded that wide publicity be given to the helpline number, coordinator and former Minorities Commission member A C Michael gave the vote of thanks.

In keeping with the Forum’s view that to fight communal forces “we need the Bible in one hand and the Indian Constitution book – spelling out citizens’ right on the other,” the meeting was closed with a prayer followed by the national anthem.