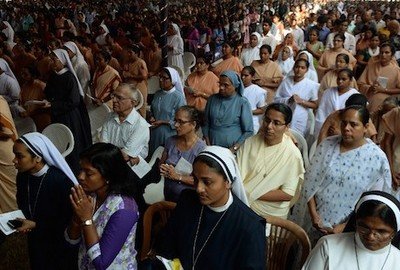 Some say covering travel costs for the poor is an unnecessary expense.

Christians in Goa are divided over a state government subsidy covering travel costs of poor Catholic pilgrims to Sri Lanka for the canonization of Blessed Joseph Vaz during Pope Francis' visit to the island nation next week.

Blessed Vaz, a 17th century Catholic priest of Goan origin, evangelized Sri Lanka under the Calvinist Dutch. Pope Francis is scheduled to canonize him on January 14.

The western Indian state’s coalition government led by the pro-Hindu Bharatiya Janata Party (BJP — Indian People’s Party) officially launched a scheme on Wednesday to provide a subsidy for the travel of 500 Goan pilgrims who want to witness the canonization.

The government says it will cover half the airfare or 12,000 rupees (US$190), whichever is lower. The subsidy will be for those whose annual income is less than 300,000 rupees.

"It is a welcome move, and we appreciate it," said Father Joseph Chinnayyan Deputy Secretary-General of the Catholic Bishops' Conference of India.

It is especially noteworthy that the move will help some poor Catholics witness the canonization ceremony, Father Chinnayyan said.

However, Father Eremito Rebllo, Goa-based vice-postulator of the Cause for Canonization of Blessed Joseph Vaz, does not agree.

“The government should not give such subsidies. It should cut down on expenditure. The government could help in making arrangement for events at holy places but subsidy trips abroad and within India should not be given for any religion,” he said.

He expressed doubt whether the poor will be able to take advantage of the subsidy. “Sometimes the rich or people close to the government make use of such subsidies and the poor are left behind,” he said.

The priest said the government did not communicate anything about the subsidy plan to him or the bishop, nor did Church officials ask for such a subsidy.

Archbishop Filipe Neri Ferrao of Goa and Daman, said Catholic priests from the state are likely to visit Sri Lanka for the event, along with 1,000 people from Goa.

Reginald Vincent, who lives in the state capital Panjim, believes the Church — not the state — should help the poor travel to Sri Lanka.

“State and religion are totally separate. The government should not interfere in religious matters. If the government is doing this for one community, it will have to do it for other communities also. That will put an extra burden on the state’s coffers,” he said.

The Church should arrange such trips for the poor. “The Church has enough money for everything,” he added.

But some lay Goan Catholics like Ezlinda Gonsalves lauded the state scheme. "It is a blessing for those who would not have even dreamt of attending such an event,” said Gonsalves, another Panjim resident.

She said that when the government is spending millions on organizing film and food festivals in the state, it should also come up with such subsidies to help the spiritual needs of people.

Olivio Fernandes of Panjim told ucanew.com he does not want to judge the government's intentions. "If it is for the good and betterment of people, we should encourage it,” he said.

“I don’t see any reason why we should not welcome it. Who else will sponsor such trips? Only government can do it. Why criticize such things that are for the good of the people?” he asked.

Vaz was born in Goa on Apr 21, 1651, when Goa was a Portuguese colony and the center of the Catholic mission in Asia. In 1686, he left for Sri Lanka to propagate Catholicism disguised as a worker.

His socio-religious contributions in the island country earned him accolades and the title Apostle of Sri Lanka.