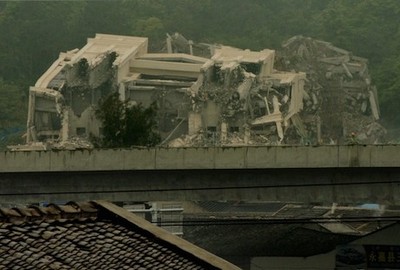 (This image taken on April 30, 2014 shows a Christian church in the town of Oubei that Chinese authorities had begun demolishing on April 28, according to Internet postings, after a weeks-long stand-off between worshippers and the local government)

China Aid says 1,300 Christians detained or arrested while protecting churches in the province since end of 2013.

The scale of a church demolition campaign in China’s Zhejiang province may be much greater than previously reported, US-based China Aid warned this week.

The campaign was already considered among the most destructive against Christianity in Asia in recent times with previous estimates of more than 400 crosses forcibly removed and about 35 churches destroyed since the end of 2013.

But the real number of crosses taken down may have reached 1,000 with up to 50 churches destroyed based on unverified reporting in Zhejiang’s local media, China Aid said in its annual report for 2014.

“It appears that the scope of persecution may be wider than reported due to fear of reprisal from government authorities,” it said.

Although Bishop Meng Qinglu of Inner Mongolia told ucanews.com last month he had heard that Beijing ordered the campaign to stop at the end of last year, crosses have reportedly been removed at three more churches in Zhejiang this month.

The day before Easter Sunday, authorities used a crane to pull down the cross on top of En Quan Church in Ningbo, according to news reports and pictures posted on Twitter.

China Aid’s new assessment of the situation in Zhejiang estimated that, since the end of 2013, at least 1,300 Christians have been detained, arrested or held in custody for trying to protect churches in the province — again, many more than previously thought.

Along with state-sanctioned churches in Zhejiang, unregistered house churches and cults were the main targets for authorities trying to curb the continued growth of Christianity in China.

“Although the majority of the characteristics that have defined persecution against the Church in previous years remains, the level and modes of persecution during 2014 has evolved,” the report said.

The Chinese government has not responded to China Aid’s report but has repeatedly denied an anti-Christian campaign in Zhejiang and religious persecution overall.

“The Chinese government protects its citizens’ freedom of religion or belief as well as normal religious activities in accordance with the law,” Foreign Ministry Spokesman Hong Lei said last month.

Although China Aid noted an outcry by the international community in response to China’s growing intolerance of religious activity, so far there has been little action.

Heiner Bielefeldt, the UN special rapporteur on freedom of religion or belief, told ucanews.com on Wednesday he would plan to send a letter to the Chinese government requesting an explanation over claims of wider persecution in Zhejiang. According to UN procedure, Beijing would then have 60 days to respond.

“It will then formally be taken on the record of the UN and used for further action,” he said.

Recent media reports have suggested that Beijing had delayed accepting Bielefeldt’s request to visit China, but he responded that his office has never formally asked for an invitation “because I would never be allowed to enter the country”.