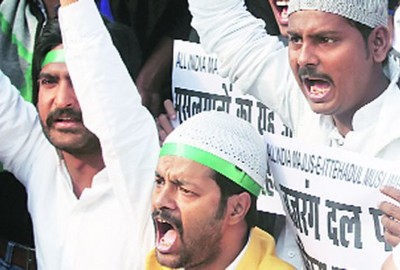 A Pentecostal convention in Ratlam in Madhya Pradesh came to an abrupt end after a group of right-wing activists brought the administration and police to the venue after accusing the organizers of converting tribals by offering money and other allurements.

Hindu Jagran Manch (HJM) activists alleged that illiterate tribals from Bajna and Sailana were brought to a venue on Power House Road in Ratlam town with a promise to cure their ailments and on the promise of giving them jobs and money.

Called Changai Sabha’, the meet was organized by the local body and addressed by preachers from Kerala and Bhopal. The HJM said the organizers had arranged for food and accommodation of the tribals and told the potential converts that only Christianity can ensure salvation, not their old religion.

CSP P S Ranawat told The Indian Express that no evidence about the alleged conversions, forced or otherwise, was found in the initial probe by the police. He said the police had spoken to a few tribals but none confirmed the allegation. He said the police could not take statements of the organizers because there was tension in the air.

After the police assured them of action, the Manch said its activists would wait till Saturday for a case to be registered against the organizers or decide the next course of action after the deadline was over.

Ranawat said between 100 and 150 tribals participated in the convention addressed by five preachers. When told about the deadline given by the HJM, the CSP chose not to speak about it.