In this file photo, Pope Francis is flanked, by Bishop Marcelo Sanchez Sorondo, chancellor of the Pontifical Academies of Sciences and Social Sciences. (Credit: Gregorio Borgia/AP.)

Chinese Catholics have reacted with shock to the news that the Vatican and China's communist government intend to sign an agreement soon over the appointment of bishops. Underground church feels 'abandoned and betrayed' and warns that some faithful will leave the community.

As reported in CRUX dated 07th February, a leading commentator on the Church in China said a Vatican official’s proclamation that the Communist state “is the best implementer of the Church’s social doctrine” is making “a laughing stock of the Church.”

Argentine Bishop Marcelo Sánchez Sorondo, chancellor of the Pontifical Academies of Sciences and Social Sciences, said in an interview with the Spanish-language edition of Vatican Insider that Beijing “is defending the dignity of the person,” and “that China is evolving very well,” even calling the country “extraordinary.”

Meanwhile as reported in the Catholic Herald of 6th February 2018, The Global Times, a Chinese government-run newspaper said in an editorial that the Pope had made “substantive concessions” to the Chinese government. Relations are therefore taking a “clearer shape” despite the opposition of “Western media and certain radical religious groups opposed to enhanced Sino-Vatican ties”. The Vatican and Beijing will re-establish diplomatic ties “sooner or later” thanks to the “wisdom” of Pope Francis, the newspaper has said.

While the underground Chinese Church has reasons to feel 'abandoned and betrayed' by the Vatican, Pope Francis may have deep-rooted diplomatic reasons.  May be through soft diplomacy, he is trying to fulfil the unfulfilled dreams of St. Francis Xavier (Please see the footnote), who was the first Jesuit missionary to visit China who landed on Chinese shores in 1552 and breathed his last  a year later on the Chinese island of Shangchuan. Isaac Gomes, Asso. Editor, Church Citizens' Voice.

Chinese Catholics have reacted with shock to the news that the Vatican and China's communist government intend to sign an agreement soon over the appointment of bishops.

The frontispiece of Athanasius Kircher's 1667 China Illustrata, depicting the Jesuit founders Francis Xavier and Ignatius of Loyola adoring the monogram of Christ in Heaven while Johann Adam Schall von Bell and Matteo Ricci labor on the China mission. (source: Wikipedia)

Under the agreement, the Vatican would be given a say in the appointment of bishops in China, while an agreement could allow Chinese authorities more control over the country's underground churches.

They were angered recently when two recognized bishops in Shantou and Mindong dioceses were asked to make way for illicit ones.

"We know that China and Vatican have been actively engaged in a dialogue, but we never expected that legitimate bishops would be asked to step down," a Chinese Catholic who requested anonymity told ucanews.com.

She said that in exchange for the agreement signed by the Holy See with the government, "the underground community needs to be sanctified."

She added: "Our faith tells us that God so loved the world that everything was best arranged by Him and He can bring good from evil, but now what is our future? Where is the church? And who is the shepherd? It is a burden for Catholics to have the game of politics imposed on them."

The woman thinks the Holy See's decision will make many Catholics leave the church. "We have no choice but to obey," she said.

John, an underground priest, told ucanews.com that the Holy See is mistaken if it believes it can achieve unity by supporting the Communist Party-controlled Chinese Catholic Patriotic Association.

Paul, an underground Catholic, told ucanews.com: "We think that the Holy See is in a united front with China's communist government."

Father John of Yunnan underground community told ucanews.com that the Holy See and the Catholic Patriotic Association have the same aim.

"Both want to extinguish our underground community," he said, adding that "bishops who join the association are forced by the Holy See." 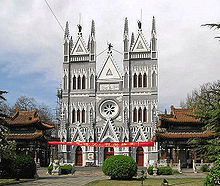 The Beitang Church was established in Beijing by the Jesuits in 1703.

He cited the example of Auxiliary Bishop Thaddeus Ma Daqin, who separated from the Catholic Patriotic Association a few years ago and then rejoined because of changes in the Holy See's policy.

He said the Holy See is in a hurry to establish relations with Chinese authorities.

The history of the missions of the Jesuits in China is part of the history of relations between China and the Western world. The missionary efforts and other work of the Society of Jesus, or Jesuits, between the 16th and 17th century played a significant role in continuing the transmission of knowledge, science, and culture between China and the West, and influenced Christian culture in Chinese society today.

The first attempt by the Jesuits to reach China was made in 1552 by St. Francis Xavier, Navarrese priest and missionary and founding member of the Society of Jesus. Xavier never reached the mainland, dying after only a year on the Chinese island of Shangchuan. Three decades later, in 1582, Jesuits once again initiated mission work in China, led by several figures including the Italian Matteo Ricci, introducing Western science, mathematics, astronomy, and visual arts to the Chinese imperial court, and carrying on significant inter-cultural and philosophical dialogue with Chinese scholars, particularly with representatives of Confucianism. At the time of their peak influence, members of the Jesuit delegation were considered some of the emperor's most valued and trusted advisors, holding prestigious posts in the imperial government.[citation needed] Many Chinese, including former Confucian scholars, adopted Christianity and became priests and members of the Society of Jesus.

According to research by David E. Mungello, from 1552 (i.e., the death of St. Francis Xavier) to 1800, a total of 920 Jesuits participated in the China mission, of whom 314 were Portuguese, and 130 were French. In 1844 China may have had 240,000 Roman Catholics, but this number grew rapidly, and in 1901 the figure reached 720,490. Many Jesuit priests, both Western-born and Chinese, are buried in the cemetery located in what is now the School of the Beijing Municipal Committee.