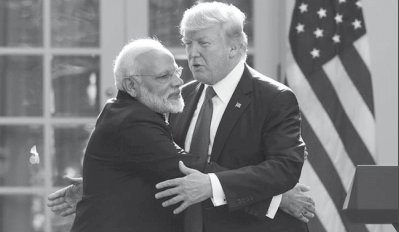 Does this sound like a recipe? It is, and isn’t! It isn’t a recipe for food, but it is food for thought, and it could be recipe for disaster if it goes unheeded. Let me unravel the mystery and remove the baffled look on your face. I just chanced upon a video on NDTV showing Harjit Singh Sajjan, the Canadian Defence Minister, eating cherries. Nothing wrong in that? Except that the Minister was sitting in his white Jeep Grand Cherokee, licence number plate EE799DD. Again this is not news. After eating the cherries he was throwing the seeds out of the car window onto the pavement where he was parked. This is the breaking news, because littering in public is an act of breaking the law in Canada. A fellow countryman in chaste Punjabi accosts the Minister (so no racial angle) and reprimands him for littering. He chastises him saying that despite being a powerful minister and an educated person, he was littering. The suitably chastised Minister mumbles an apology, but the vigilant citizen doesn’t let him off the hook so easily. He video-graphed the entire episode and made it public. What lessons can we learn from this? Firstly, that nobody, no matter how high and mighty, is above the law. Secondly, the common citizen, no matter how lowly, can take on the mighty (David and Goliath). Thirdly, since the Minister was out shopping, he was in his personal vehicle, minus any security or trappings of power.

A poignant lesson for us Indians who, having inherited a Brahmanical legacy, bow and scrape before the powerful; be they politicians, bureaucrats, religious gurus or corporate honchos. I daresay that we Indians are the most servile of people (though not docile, as increasing instances of mob lynching and road rage indicate). I have not yet signed off from North America. Since I get home at 9 pm I normally get to see a spot of TV only after 10 pm. That is when a menagerie of biased anchors, ebullient party spokespersons, walrus moustached retired generals, religious hotheads, the occasional human rights activist, and the argumentative Indian (a la Amartya Sen) get together to tell us what “the nation wants to know”. Or rather what they presume that we don’t know; hence need to be enlightened by their rhetoric. Barring NDTV, and to some extent India Today TV, I cannot stand these pseudo gladiators in the neo Coliseums called TV studios. My wife, who cares for the differently abled, can’t bear to watch TV with me switching channels. She feels that I suffer from an Attention Deficiency Syndrome.

I often switch to Comedy Central, an American channel. What is central to this article is what I saw there on 25th June, the day that Indian Prime Minister (IPM) Narendra Modi was hugging and dining with Donald Duck (oops Trump), aka POTUS. That night the channel was roasting Trump. It was evidently an old episode, from before he ran for POTUS; but nonetheless, being broadcast at a time when the IPM was meeting him in state, it spoke volumes for the freedom of the press in the USA. For the uninitiated, a roast is where the object is subjected to a battery of snide remarks, passing off as humour, by a host of kings of sting and queens of mean. Among the “comedians” at this roast were Larry viewpoint INDIAN CURRENTS 17 – 23 July 2017 39 King and Snoop Dog. The roasters told Trump that he had ruined the lives of many models, and built worthless hotels. Melania, his wife, married him for love – hold it – for love of money! In a twist to the old adage he was described as being born with a silver stick in his a..s. Imagine any comedian or roaster in India poking fun like that at the IPM or his coterie of saffron buddies! They would hear a midnight knock from the cops, booking them for sedition, or violation of the Information Technology act. That is if they had not already been lynched by a mob screaming something akin to “Bharat Mata ki Jai”. Coming back to the POTUS, the U.S. Congress and Justice Dept are both investigating him and his Russian salad.

Almost every night Jimmy Falon, on The Tonight Show, mimics the POTUS and pokes fun at him. For appointments to top Govt offices the hearings are aired live on TV, so that the citizens know what they are getting. In contrast, we servile Indians are stuck in the Dark Ages. Is it our ancient culture? Recently the Supreme Court has reprimanded the Govt for its opaqueness in appointing the Chief Election Commissioner, a confidante of the IPM. Small wonder then that the honourable Judges prefer to stick to the creaky collegium system of appointing others to the Bench. They just don’t trust the political establishment. Did I hear somebody whispering about the Lokpal, something that had verily brought down the UPA Govt in 2014? The IPM probably told the POTUS that the decision has been deferred to 2022, when India will celebrate 75 years of Independence. Over dinner the IPM may even have given some Chanakya style advice to the POTUS, to maintain a stoic silence and to allow the “fringe elements” to do the talking. He may have also advised him how to hush up issues in the name of national security. Would have loved to have been a fly on the wall when the IPM and POTUS hugged and dined together.

Am I now being a fly in the ointment of the powerful? As a concerned citizen it is my duty to be so; for, eternal vigilance is the price of freedom. It is high time that the high and mighty came down from their high horses; to live, move and behave like ordinary citizens. Should the IPM wear a suit with his name woven into it? Should his heir apparent, Yogi Adityanath, visit the poor only after they have been given soap and shampoo to look presentable? When the Yogi visited the house of slain BSF constable Prem Sagar in Deoria district a special carpet, sofa and air conditioner was installed, only to be towed away the moment he left! Is this not a crying shame? Not in my name please, because I won’t play this game of thrones – of supercilious, snobbish, sneering, VIP culture.

We are told that the red beacons have been removed. But the hooters and shooters are still there. I mean the escort services (no pun intended). My classmate, Anand Prakash Kala IRS (Retd), was the former Special Secretary in the Union Finance Ministry. Earlier he had held several sensitive posts like DG Economic and Revenue Intelligence, Director Narcotics Bureau etc, and had received a Presidential Award for distinguished service. Among the highlights of his illustrious career was his arrest of the self-proclaimed god man late Chandraswami in Dubai, and the raid on late Tamilnadu Chief Minister Ms Jayalalithaa that resulted in her conviction and imprisonment. While addressing a meeting that I had organised a short time ago he had said, “India is the only country where citizens address bureaucrats as SIR. This in turn gives the impression that the Govt, as personified by the bureaucrat, is the dispenser of largesse, and the citizen a humble beneficiary of the same”. With such a wealth of experience Kala was not talking through his hat. So, be it the bureaucrat or the politician, I cannot be a silent spectator to the VIP culture.

I salute the Canadian Punjabi who ticked off his cherry picking Defence Minister. I salute the roasters in the USA who have the guts to take on the POTUS. I avoid calling sarkari babus “Sir”. I prefer to use the Hindi suffix “ji”, as a moderate term of respect. I also do not address our priests as “Father”, or bishops as “My Lord’. For our Brother Jesus taught us that we have but one Father in heaven. So let me embrace humanity as my brothers and sisters; and with St Francis of Assisi address nature as Brother Sun or Sister Moon. That is my recipe for public life. (The writer is the Founder Convenor of the Kanpur Nagrik M