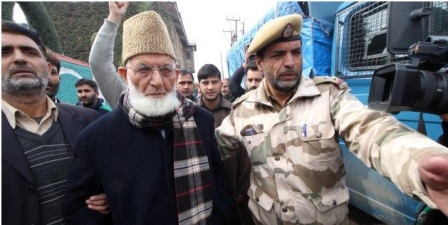 The Centre is considering moves to curb their foreign travel by withdrawing their passports and denying travel documents in some cases.

(Note: You can’t have the cake and eat it. You can’t cry hoarse “Separatists, separatists” living all the time in India (Kashmir) enjoying its benefit and proclaim allegiance to Pakistan. They shout anti-India slogans in Kashmir and no action is taken against them by the State or the Centre. Who is at fault? It looks both the state and centre should share the blame. Let them first enforce the rule of law. Get them out of India and find a neutral place – not Kashmir or Pakistan – and thrash out their differences. To me this alone looks rational. james kottoor, editor)

NEW DELHI — The Centre may harden its attitude towards separatist leaders in Jammu and Kashmir, making their foreign travel difficult and scaling down the security which they enjoy at the exchequer's cost.

Miffed over the cold shoulder treatment given by separatists to the Members of Parliament, who were part of the all-party delegation that visited the state, the Centre is considering moves to curb their foreign travel by withdrawing their passports and denying travel documents in some cases.

Besides these, the Centre will also scrutinise their bank accounts and complete pending investigations in cases against them so a strong message goes around that those provoking youths in Kashmir Valley to create disturbance since the killing of Hizbul Mujahideen commander Burhan Wani on 8 July will not be spared, government sources said.

The home ministry's tough stand came apparently after the nod from Prime Minister Narendra Modi, who is said to have conveyed that time has come to act tough with the separatists, sources said.

The snub by the Hurriyat leaders who refused to meet some members of the all-party delegation has upset the government to the extent of Union home minister Rajnath Singh saying that such behaviour was neither 'Kashmiriyat' nor 'insaniyat'.

Sources said there was a feeling in the government that lack of governance was a major concern for Jammu and Kashmir and this needs to be addressed.

The central government feels that the state government is treating separatists with kid gloves and have to be tough against them, they said, claiming students, parents and the middle class were getting restless and wanted the cycle of violence to end.

The final decision on these issues, however, will be taken after the all-party delegation, which visited the troubled state, meets here tomorrow and consultations at the highest level of the government, sources said.