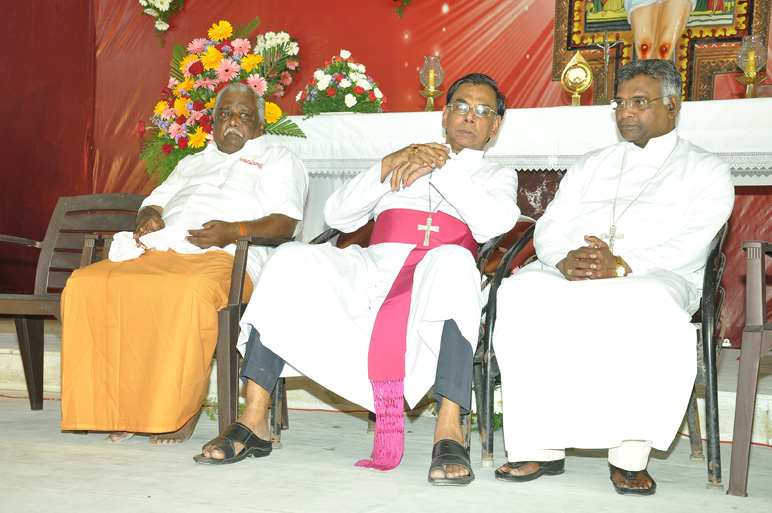 (Note: The whole  Catholic church in India is made up of three Rites, Latin, Syromalabar and Syromalankara. It is known as the Catholic Bishops Conference of India(CBCI)  All three of them together have 170 dioceses. The biggest partner in this three Rite Combine is the Latin Church with 131 dioceses .  It is known as Catholic Conference of Bishops of India (CCBI). Its Family Commission is made up of  Bishop Lawrence Pius of Dharmapuri  Diocese, Chairman and  four members: Fr Milton Gonsalves, Fr Arul Raj, Banglore, Fr Cajetan Menezes, Mumbai and Sri Alan Doulton,  Pune. The letter below received on July 17th is a reply to CCV editor’s Email of July 6, 2015  sent to the Bishop with copy to four members. Editor)

Greetings from the Bishop’s House, Dharmapuri!  As promised I am responding your email. First of all I would like to state that this is the first time I am receiving emails from you. Secondly, a word of appreciation to you for your interest and enthusiasm in all that takes place in the Church in India. You have shown a particular interest in family issues. I feel very happy about this.

Having said this, I am afraid you are not getting the correct information regarding the CCBI Family Commission. Let me clarify that the CBCI has no family commission.

But the CCBI has. I am unaware whether the other two ritual churches have family commissions. Last year in response to the Lineamenta and the questions that followed it, the questions were sent to all the Latin dioceses. However only around 60 dioceses out of 125 dioceses responded. The answers were collated by a team headed by me and sent to Rome well ahead of the Extraordinary Synod.

However a group of well-meaning laity headed by Mr. Chottebai of Kanpur wrote in the New Leader and other magazines stating that the laity were not consulted with regard to the questions. They wrongly said that only 46 dioceses were responded to the questionnaire.

This year in preparation for the Ordinary Synod in October, 2015, to make it public to all Catholic, the 46 questions and the summary of the Lineamenta were published in Catholic magazines like New Leader and Examiner. So nobody can say he/she was kept in the dark about the Lineamenta. Further, a simplified questionnaire based on these 46 questions were sent to all the dioceses through the respective bishops and Family Commission Secretaries. We received more than 55 thousand responses out of which 22 thousands from Tamilnadu alone. Again all the responses were collated and sent to Rome before April 15, 2015.

Having done all this, the members of CCBI Family Commission as well as I was pained to read in the Indian Currents an article by you stating that nothing was done by the bishops for the Extraordinary Synod and that things may go in the same way this year too. I do hope you get your facts correct before dashing off articles in periodicals. We have demanded an unconditional apology from the editor of Indian Currents for his irresponsible and populist kind of journalism. May God bless you!

Yours Fraternally in Christ,

(Note: What follows is the reply of CCV  Chief Editor to Bishop Lawrence. What the editor knows for certain from reliable sources is that neither the Editor of Indian Currents, Delhi, nor the editor of Sathyadeepam, Kochi  never heard of the survey under discussion until he raised the question – Editor)

Heartfelt greetings, coupled with ‘Congrats’ from  james kottoor,  just a very distant follower of the country bread carpenter on Nazareth, nothing more, nothing less.

Congrats because you have proved to be a man of your word because I told my co-editors already yesterday, that I must be getting a letter from you as promised. This is just a note to acknowledge receipt of your letter only, as I too happen to be overloaded with work from dawn to dusk as the Chief Editor of a very busy Global website called, Church Citizens’ Voice (CCV). More about it and other discussions half way, can be found in the corresponding website pages.

As you say, it is our first personal encounter, I don’t know you and you don’t know me either. This I hope will be made up in due course. The subject we are discussing is known to you as one presiding over a family commission, and to me as one dragged into it ever since Dec. 13/2013 when I had a personal discussion of the topic with Cardinal Alencherry.

Just one more point only for the moment. You speak of my incorrect information about CCBI as different from CBCI. You easily find CBCI in the Google search, but not CCBI since it is only a part. I am focused on the whole Church in India, CBCI  to which the Pope asked to conduct a survey, not to CCBI which is just a part only and which alone may be your vineyard to look after.

When almost all doors remained closed in spite of my knocking to get information about the survey conducted, I wrote  simultaneously also to  the head of the CBCI, Cardinal Baselios Cleemis (also to Cardinal Alencherry) asking if the Survey asked for the by the Pope was actually done. To this day I have not heard from them. But I heard from Cardinal Oswald Gracias, to whom I didn’t write at all. He wrote about the survey he conducted and I answered him  and discussions on it are going on all over India, in portals like CCV, Laitytude etc.

So a lot of water has already flown through the Tiber, ever since our first letters. To learn what has happened kindly  check the attachment dealing with Cardinal writes to CCV Editor, and CCV Editors, to know about us, Family Survey Search on, to know what is happening now and “Who destroys Catholic Families, in India”, one of the many articles I wrote on a terminator cancer eating into the vitals of Catholic families, one sore point on which the Hierarchical church in India stay tight lipped. I hope our bishops will definitely discuss it before they go to Rome.

Sorry I am burdening you with a lot of reading work. But I have been forwarding all my articles to all bishops in India through emails available in the CBCI website. So you also must have been receiving them. But my great regret is that not a single bishop gave me even a hint of the survey you say, you  conducted. That is the state of vertical dialogue we have in India.

Once again many thanks for writing this letter. Hoping to learn more in due course and praying for the advent of the day when we all will be united and concerned about the whole Church in India (see attachment Bombay Laity Voice)  and not just a part of it only imitating Cane saying: “Am I my brother’s keeper?” Let His prayer (John 17) come true to remedy all such divisions.

PS: Kindly excuse me for any or many typing errors as I am just a one-man battalion only.  5 Attachments. Jk

(Note: What follows is the first letter CCV editor wrote on July 6th to Bishop Lawrence of the CCBI family commission. Editor)

Prayerful greetings from james kottoor. I happen to be the Chief Editor of Church Citizens' Voice (CCV) for the time being, running this portal in collaboration with two others as a free service, not for any profit. See attachment about us (CCV Editors).

Even otherwise I have been writing on Synodal Survey from Decmber 2013 on wards after personal discussions with Cardinal Alanchery  to find out why no family survey is done in India in 2014 by Indian bishops irrespective of their Rite differences.

I used to send all my writings to all Indian  bishops through emails available in the CBCI directory.  In many of them I used to highlight the importance of the Survey and some burning issues destroying families in India which the bishops should discuss and settle.

One article in this context is: Who destroys Catholic Families in India? See pure Blood attachment.  This too also was sent to all Indian Bishops and 20 people reacted to it including one bishops. So you too must have received it.

Similarly another thorny issue giving heart burns to Catholic families is getting Free status certificate for inter-Rite marriages. When it exploded in Delhi in the secular press I wrote: Eparchy Issue Explodes in Delhi and was sent to all Indian Bishops but no one responded or reacted.I don't mention here many more I sent. I even offered the CCV as a forum for discussing 46 questions of the Synod on a national or regional level, but no bishop responded.

It is from Sri Alan Doulton I learned few days ago that Latin Bps did a survey. To know about other Rites, I may have to write to them separately, since Catholic

Church in India is not working as one man.

I still believe the Church in India, and every where else, should be a united church irrespective of Rite divisions, a transparent and dialoguing Church, where

Bishops should dialogue with all Church Citizens. Ever since Francis used this phrase we don't use the term Laity, which has become pejorative like Sudras in

So please let us know, what important things the Church citizens surveyed  wrote in the last column where they are asked to write their suggestions. How many wrote about Endogamy which is promoted by bishops and opposed by Church Citizens and memorandums are being sent to the Pope even now because of this tug of war.

Looking forward to the valuable data you have collected from Church Citizens in India and conveying CCV’s good wishes to every one in  your team,