(Note: This is a press release we received from prashanti <prashanti.orissa@gmail.com, with the introductory note: Religious leaders condemn lynching, call for rule of law to restore peace and communal harmony. India’s deep spiritual strength is bulwark against hate, divisive forces.

But the photo above clearly shows that the CBCI has taken the initiative. So the CCV extends its hearty congratulation to the Catholic Bishops Conference of India(CBCI). In fact the CCV was the first to suggest this idea already in the last week of June. See our article: “Why not an emergency CBCI meet to help Modi build a united India?  24/06/2017 in CCV.

We sent it to all CBCI bishops, as we keep posted on them every week with half a dozen of our postings. Usually heardly anyone used to respond, except a few who write us, not to forget to send our daily writings. This time the wonder of wonders happened. The CBCI chairman Cardinal Baselius Cleemis himself answered us from Rome, expressed his interest to meet and talk and that he would be returning from Rome July first. CCV replied immediately and asked him to contact us. But to this day we were not lucky to hear from him again.

We said wonder of wonders because it was the first letter ever to receive from Cardinal Baselius, because we have been writing to him for years, during the family synods in Rome, to know if the CBCI was conducting a survey of the faithful, and more important, during the Kidnap and torture of Kadappa Bishop, urging him to express his condolence and concern for a brother bishop. But unfortunately he never replied to us nor express a public statement of concern to our knowledge. That is a long story of disappointments.

Yet he thought it fit to answer our mail for the first time ever and we thank him for it. What we had asked was to get all bishops of India together, Catholic and denominational. They have done one better,  given the meeting a wider backing, as tough coming from all religious leaders, although only  40 religious leaders could attend it. Some thing is better than nothing. So they can still think of an emergency meet of all bishops or Catholic bishops numbering around 100.

It would be interesting to find out how many Catholic and denominational bishops attended. More later as the CCV editor has to leave for USA immediately. We wish and pray that the CBCI led religious meet produce a 100 fold good fruits. james kottoor, editor)

New Delhi: Around 40 spiritual leaders and intellectuals in the national capital on July 16 urged Indians to check an environment of hate, violence and disregard for the rule of law spreading across the country.

They met under the aegis of the Catholic Bishops’ Conference of India (CBCI) and called upon the government to end impunity, which they noted, was at the root of the atmosphere of fear that stalks the land today. They also said these developments threatened not just secularism, but the country’s Constitution as well as the democratic fabric.

They want people to draw from India’s deep spiritual reservoirs to check increasing cases of lynching that have claimed “many innocents of religious and marginalized communities.” The meeting welcomed Prime Minister Narendra Modi’s assurances to leaders of Opposition parties on the eve of the Monsoon session of Parliament.

However, the leaders noted that lynching in various states on the pretext of protecting cows have shoked majority of Indians from all communities. The prime minister must now see that state governments and their police forces acted against the guilty in an impartial manner, they asserted. 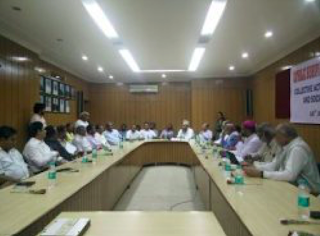 The meeting at CBCI Centre.

The meeting agreed on a five point urgent program of action:

.The ideology of hate is a reality and needs to be challenged by governments, political parties, civil society activists, the criminal justice system and religious communities in a concerted manner.
• Religious leadership must act at the grassroots to assert the inherent unity of the people. This will help restore public confidence and remove the mutual suspicion that had started growing.

• The leadership must generate literature as well as content for the traditional, mainstream and social media to challenge falsehood and hatred. Social media can indeed also be used to defeat hate and strengthen bonds between communities.

• Community leaders must come together at various levels so that tensions can be diffused and trust restored and strengthened. Similarly, national institutions including the National and State Minorities Commissions and other structures must be encouraged to actively work in restoring peace and help strengthen the rule of law. This would also go a long way in ensuring the devolution of development efforts under the 15 point programme and other government measures.

• A National Inter-Faith and Civil society convention will be held as soon as possible to discuss the developments and the measures that the governments need to take at the national and state levels.

Bishop Theodore Mascarenhas, secretary general of the Catholic Bishops’ Conference of India, convened the meeting at the CBCI Centre.