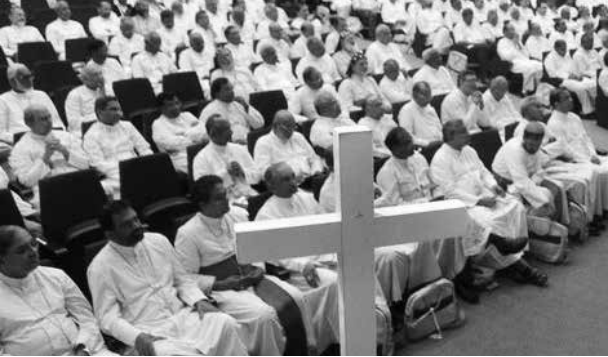 The CBCI statement has played safe by not making any reference to the Modi government while mentioning about the challenges. The bishops should have proposed some concrete ways and means for shunning excessive institutionalization, clericalism and extravaganza.

(Note: This report is from the latest issue of Indian Currents, April 10/16/.The writer’s critique also is an excellent example of “playing it safe”, striking to wound and refusing to hurt, naming none of the 182 bishops. Instead of saying: “That man is You”, as did Prophet Nathan  pointing an accusing finger at David, he blamed none in particular, I was tempted to think. Nathan was bearing witness  to truth following  the principle: “Friend of truth first, friend of Plato (bishops) second”. That would have surely hurt the CBCI Chairman first, all “yes” mongers second. That is the limitation of a Church sponsored/controlled medium. A “sign of openness and desire for change” can be detected only when the bishops respond publicly to specific allegations of wrong doing, from well-or-ill-wishers  or from concerned lay people. Such a response from the part of the CBCI is still to be seen. From 2013 concerned laity in Kerala have been writing very polite joined letters signed by up to 18 people to the top brass in the Syromalabar church to start a dignified vertical dialogue for  mutual benefit.
But none of our efforts were lucky enough even to get an acknowledgement. During 2014-15 CCV wrote several letters to CBCI Chairman Cardinal Cleemis, asking if he conducted a national survey on the family but could not get any reply. On the shameful practice of promoting pure blood marriage practice (Endogamy) we and concerned people in Kottayam Diocese sent so many memorandums to bishops without  any success to get a reply from any of them. Last week’s “Cover Story”(a Malayalam weekly TV feature)  a very penetrating analysis of current happenings, religious or political in the State, was on the response of the two Oriental Rites (Malabar & Malankara) to Pope Francis’ example and call to give equal treatment in washing the feet not only of men, but women and members of other religions. But the  two Oriental Rites would not budge or change their tradition which is more important, without thinking it over for another year. To meddle in politics or to do business ventures (Cover story mentioned conducting of Self-financing colleges, Super speciality hospitals, meddling in politics) these two Rites need no permission from any one because they are “Sui Juris.” Whom are these bishops trying to fool when they speak of “transparency” when their meet didn’t have even an iota of similarity to the two open Synods in Rome? If these bishops have the slightest wish or inclination  to change for the better, they should first learn and do  dialogue with every Church Citizen, waking up to the present reality that the age-old division between Clergy and Laity is long dead

and  buried. Until that happens no change, not even a sign of change is to be expected from the two Syro-Rites. All the same Jacob Peenikaparambil, is to be saluted for being more open and forth-right about the CBCI than  any other commentator in other Church related media I have seen. james kottoor, editor)

The CBCI deserves appreciation and congratulations for choosing a relevant and appropriate theme-“The Response of the Church in India to the Present Day Challenges”- for its 32nd Plenary Assembly held at St. John’s Bangalore from 2nd to 9th March 2016.

India under the rule of Bharatiya Janata Party is going through a crucial period, facing many serious challenges. Hence it is gratifying to note that the 182 bishops during their week –long meeting rightly identified a good number of challenges faced by the country. Two challenges mentioned in the statement deserve special attention: 1) “Widespread intolerance, religious fanaticism and fundamentalism, attacks and atrocities against intellectuals, social activists, religious personnel and institutions”. 2) “Violation of Fundamental Rights enshrined in the Constitution, especially minority rights”.

In the history of India these are not entirely new phenomena. What is worrying is that ever since BJP came to power at the centre under the leadership of PM Narendra Modi these threats have become acute and have assumed alarming proportions. The CBCI statement has played safe by not making any reference to the Modi government while mentioning about these challenges.

The bishops also have made an attempt to spell out some challenges within the Church. Some of the internal challenges mentioned in the statement come under the ambit of self criticism. The courage for self-criticism is a sign of openness and desire for change. For example, while speaking about the Bishops and Priests, the statement proposes to shun excessive institutionalization, clericalism and extravaganza. It is nothing but an implicit recognition that the Indian Church is plagued with the above mentioned three diseases and the leaders of the church are mainly responsible for them.

It seems that the bishops have left out some important issues about which they should have taken a firm stand collectively and made known to the Christian community and the people of India at large. It appears that the bishops have failed to identify or forgotten to mention some crucial internal challenges like

2) conflicts based on rites, caste and language

4) failure to empower many catholic families, especially belonging to SC and ST and

and erecting huge statues and

7) Absence of participation of the laity in the Governance of the church. Strengthening the Church from within is a prerequisite to respond effectively to the external challenges.

1) growing intolerance based on hatred and revenge, promoted mainly by the RSS-BJP combine with the tacit support of the BJP governments and

2) attacks on the minorities by the members of the Right Wing groups. Ministers, MLAs and MPS of BJP indulge in hate speech, often challenging the constitution of India and the government and the PM keep silence. At the same time university students are put behind the bars, slapping on them sedition charge for the alleged anti-India slogan shouting. Even when the CBCI meeting was going on a church was attacked at Kachna village on the outskirts of Raipur Sunday, 8th March 2016. The attackers were chanting, “Jai Sree Ram”.

According to Christian Solidarity Worldwide (CSW) 194 attacks on Christians and their institutions took place during the Modi regime up to May 2015. Although CBCI identified these threats in the form of challenges, the bishops failed to arrive at a strategy to respond to them effectively. It was an occasion for the leaders of the Church to tell the government to control the right wing groups and ensure the protection of the life and property of all citizens by adhering to the Constitution of India which PM Modi once described as the ‘national scripture’.

Pluralism (Ekam sat vipra bahudha vadanti) which is the heritage of India and secular democracy as envisioned in the constitution of India are the bulwarks against religious fundamentalism and the efforts to convert India into a theocratic state. The statement of the CBCI has not sufficiently dwelt on promoting these core values through the various ministries of the church. In fact, the bishops should have prepared an action plan for a nation-wide campaign to propagate these core values, because it is the urgent need of the hour.

Majority of the proposals under seven responses in the final Statement are very general in nature without any specificity or sharpness. They look like the old wine in new bottles. For example under the head, “Bishops and Priests” three relevant proposals are made: • Shunning excessive institutionalization, clericalism and extravaganza. • Animating pastoral structures, such as Diocesan/Parish Pastoral Councils and Finance Committees, etc. • Promoting transparency and accountability at all levels of Church’s administration.

The bishops should have proposed some concrete ways and means for shunning excessive institutionalization, clericalism and extravaganza. Building huge churches, organizing mega events on the occasion of the consecration of bishops and jubilee celebration of the dioceses and institutions are concrete examples of extravaganza. Instead of animating Diocesan/Parish Pastoral Councils CBCI Plenary Assembly 2016 and Finance Committees, etc. what is required is their democratization.

Concrete measures like presenting the audited statement of account and the annual budgets of the dioceses and parishes at the Pastoral Council and Parish Council and getting the approval of the concerned bodies are the means for ensuring accountability. In the present context of India quality education is the most effective means for empowering the marginalized and weaker sections of the society. In fact, it is the magic that can liberate them from the vicious cycle of poverty.

The bishops could have given a road map for making use of the large network of the educational institutions of the church for this purpose. The 32nd Plenary Assembly of the CBCI was held at a crucial juncture. The CBCI could have taken a firm stand in favour of pluralism and secular democracy, which are essential for the very existence of the church in India. It also should have done a sincere introspection on how effectively it responded to the attacks on the minorities, pluralism and secular democracy during the last twenty one months.