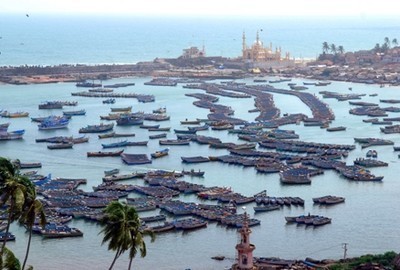 Catholics in Trivandrum Latin rite archdiocese have threatened to oppose the Vizhinjam port project if the government fails to offer rehabilitation package to families of fisher people facing displacement.

A pastoral letter read out during the Sunday Mass in parishes asked to announce a special package to help the fishermen who will be displaced and become jobless.

The project was given environmental clearance in 2011. The expert committee in the Ministry of Environment has then itself pointed out that if the project is pursued as planned, there will be grave repercussions on the fishing harbor at Vizhinjam, said the letter.

A four-kilometer break wall planed in the area to help the project will wipe out coastal line extending from Poonthura to Veli, adversely affecting the lives of traditional fishermen.

The pointed out that in 1970s, construction of a 400 meters break wall for fishing harbor at Vizhinjam, has displaced some 100 families people from Poonthura. The loss of land is still visible there. Many official studies conducted under Central Government have also testified it.

Above all, in the project site, 400-m deep shipping channels will have to be dredged. And major ships will be passed along these routes. Because of it, the traditional fishermen from Pulluvila to Pozhiyoor will be banned from going into the sea for fishing, the pastoral letter said.