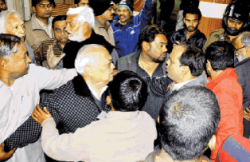 The activists of Bajrang Dal (the party of the strong stout) and Dharma Jagran Manch (forum to awaken religion) accused Father Prasad and Brother Sleeva of trying to convert Hindus to Christianity. They demanded that the police arrest the missionaries, after registering a First Information Report against them.

The two were let off after three hours of high drama at the police station, Tapan Bhattacharya, a Hindu member of the Sadbhavna Foundation that organized the meeting, told Matters India on Monday. He said the Hindu radicals could not prove the charges against the missionaries.

The missionaries belong to the Society of Divine Word, an influential Catholic Religious congregation that works with various religious groups for social harmony and peace in Indore, the commercial capital of Madhya Pradesh state. Father Prasad, 60, is the secretary of Indore diocese’s commission for inter-religious dialogue and ecumenism.

The Sabhavna Foundation, launched in 2005, comprises members of all religions in Indore, and Father Prasad, an inter-religious activist, has been its secretary from the inception.

Bhattacharya said they observe the festivals of all religions, but choose a venue belonging to another religion to celebrate them.

The Christmas meeting was held at Gita Bhavan (house of Gita), a convention center under a Hindu trust. People of all religions use the place for various functions, he explained.

Fr T Xavier, Divine Word congregation’s Madhya Pradesh provincial, was among several dignitaries of the city attending the Christmas program when scores of Hindu radicals came to the venue shouting.

“They alleged we were converting Hindus and demanded to know if we had the permission to conduct the meeting,” Bhattacharya narrated. “We showed them the permission signed by Gita Bhavan’s trustee chairman, but they dismissed it, saying the venue is not the chairman’s personal property that he can grant permission to anyone.”

The participants, mostly Hindus, tried to explain that no conversion was taking place. “But they refused to listen to us, saying we are not real Hindus since we promote secularism,” said Bhattacharya, a Brahmin, the highest caste in Hinduism.

He said the Hindu radicals wanted action against on the Catholic missionaries. “But all of us, Hindus and others insisted they should make us also the accused.”

Father Prasad told Matters India that the protesters forced him to ride pillion of the motorcycle of the lone policeman present at the meeting venue. “They hit me on head from behind and abused me,” he said. He said it was around 10:30 pm when they came out of the police station.

The priest said the incident was unexpected and unnerving. He said he had told Brother Sleeva that their experience was “only a small opportunity” to witness their Christian faith.

Anand Mohan Mathur, a former Advocate General of Madhya Pradesh and president of the Sadbhavna Foundation, said they organized the program after obtaining all permissions. “Whether Diwali or Christmas we celebrate it together. Nobody’s religious sentiments were hurt by our program,” he told naidunia.com.

Vinod Sharma, a committee member of the Dharma Jagran Manch, said they protested because there was no mention of Hinduism in the invitation to the program. “They were celebrating Christmas Day in the name of Sadbhavna. The organizers claim they respect all religions, but they did not bother to mention Hinduism in their notice,” he told naidunia.com.