Catholic nurses pledge to be guardians of life 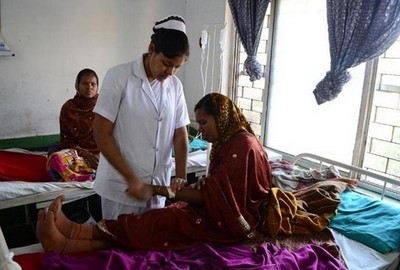 The apostolic nuncio, five bishops, 16 priests and experts in the medical field were present at the convention.

India: (UCAN) Catholic nurses in India reiterated their pledge to be ‘guardians of life’ against today’s ‘culture of death’ at their 20th annual meeting held in Mumbai recently.
“As nurses, we see ourselves as the guardians of life. Against the culture of death, we want to build a ‘civilization of love’ founded on the universal values of love, peace, solidarity and justice,” stated the Declaration of the three-day National Convention of Catholic Nurses Guild (CNG) that ended on Nov 2.
Representing the 11 thousand members of the CNG, 325 nurses from 46 dioceses in India attended this year’s gathering, themed "The challenges of care and compassion in service to life".
The apostolic nuncio, five bishops, 16 priests and experts in the medical field were present at the convention.
In the final document, the health workers reminded fellow Catholics that the Church's involvement in health and healing goes back to Christ. "Jesus’ mission was to make human life hope-filled and fulfilling. He came that we may have life and life in abundance (John 10:10). It is in the context of abundant life that we can view Jesus’ healings which form so great a part of his ministry. Jesus sends his disciples ‘to heal every disease and every infirmity’ (Matthew 10:1).”
“Since her inception, the Church has worked for the sick, the suffering and the dying. In doing so, the Church is engaged in affirmative action upholding the dignity and honour that is due to the human life," it stated.
The conference saw several seminars during which health professionals shared experiences. From these workshops, the difficulties of caring for the sick emerged, a form of care which "is based on a set of basic principles: respect, compassion, concern and love, gentleness and empathy" and the concept that "we must take care of the whole person, not only of his or her illness,” stated the nurses.
They pointed out how the "culture of death" prevails in today's society. “Human life is threatened even before a person is born: Abortion is rampant across the globe. In vitro fertilization often involves the deliberate destruction of human embryos. Surrogate motherhood separates the birth of a child from the affectionate conjugal embrace of husband and wife which is the only context that protects new life from commodification and exploitation."
The nurses declaration highlighted their role as “guardians of life” amid these and reaffirmed their commitment "to protect life, as a precious gift of God, and take care of it from birth to natural death; to strengthen [their] spirit of compassionate care; to care especially for the most vulnerable individuals, such as the mentally ill and disabled people, and avoid any discrimination based on sexual orientation; to support both patients and their families in the path of the end of life.”
Stating they as part of the Church are “called to proclaim the Gospel of life", the nurses concluded entrusting their work "in the hands of Mary, Mother of life".