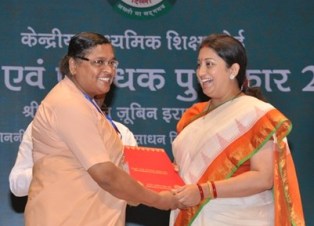 New Delhi (Matters India): A Catholic nun and a priest were among 34 teachers the Indian government honored for their service to education.

Sister Zita Cutinha, a member of the Franciscan Clarist Missionary of the Most Blessed ‎Sacrament, and Carmelite of Mary Immaculate Father Mathew Thengumpally received the Teacher’s Award for 2014 on September 3, two days before the country celebrated the Teacher’s Day.

The minister hailed the contribution of teachers and mentors for their role in shaping the future ‎generations. Irani congratulated all the awardees ‎and said their contribution in nation building and liberating generations is unparalleled. “Teachers ‎are truly the pride of a nation,” she added.

‎ All the awardees work in schools affiliated to the Central Board of Secondary Education that conducts nationwide examinations for the tenth and twelfth grades and several other competitive tests.

She was honored ‘in public recognition of her valuable and commendable services rendered to the community for the cause of education as a teacher of outstanding merit’.

Receiving the award, the Catholic nun who hails from Mangalore expressed her gratitude to the CBSE for acknowledging her service in the field of education and said that the award is a challenge for her to go on working tirelessly for the nation building by imparting value based education to the needy and the poor.