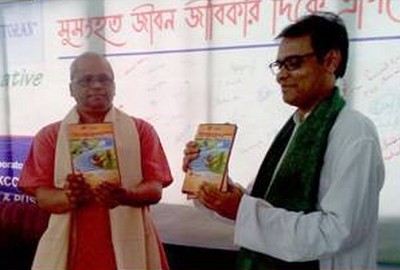 A similar project was launched on early this year in the new state of Telegana. Another one is scheduled for launch on May 8 in Karnataka.

Caritas India, the social action wing of the Church in India, has launched a new project in West Bengal to help marginal farmers improve their socio-economic status through right farming methods.

Providing livelihood security among small farmers should be a priority for the government, he said questioning the recent cut in allocation for rural development in the union budget.

Media reports say budgetary allocation for rural development this year was the lowest in the past three years.

At a time when most villages are witnessing reverse migration, resulting in three per cent dip in rural wage growth, the project plan to make farming more effective.

The project supported by Misereor, a Caritas member organization based in Germany, will focus on expanding agricultural research, looking into reforming of land tenancy systems especially in the Hills (Jalpaiguri and Darjeeling) besides facilitating agricultural marketing.

The three-year project shall cover a range of marginalized household of 105 villages across 10 blocks, ensuring sustainable livelihood opportunities through organic farming while attaining legitimate rights and entitlements to them.

“Based on low cost organic and multi-crop cultivation models of Caritas, the project will ensure increase in agricultural produces and livelihood facilities by fifty percent by 2017," according to state officer Asha Ekka.

The seven partner organizations, responsible to implementing the project, would introduce vertical and multi crop system and will facilitate different government schemes for the eligible households and help scale up dormant skills.

Member of Legislative Assembly (MLA) Rukhbanur Rahaman from Chapra – chief guest at the project launch has promised all assistance for implementation of the project in his constituency.

A similar project was launched on early this year in the new state of Telegana. Another one is scheduled for launch on May 8 in Karnataka, said the press release.