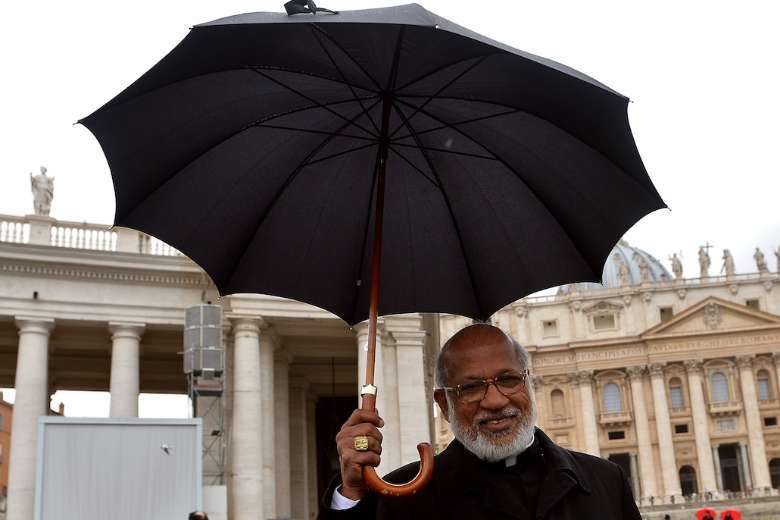 Cover photo: Cardinal George Alencherry walks in St. Peter's Square in Rome after a pre-conclave meeting at the Vatican on March 6, 2013. (Photo: AFP)

On Tuesday 6th March 2018 the Kerala High Court came down heavily on the Syro-Malabar Catholic Cardinal George Alencherry  and asked whether the "Cardinal is the King” during the hearing of multi-crore land scam case of Ernakulam Archdiocese. The strong reprimand of the Court came when the Cardinal said he was only accountable to the Pope and not to a court of law.

It was a big victory to the Save Archdiocesan Movement for Transparency, when the Kerala High Court ordered a police probe against the Cardinal and others for allegedly effecting a land deal that caused a loss of crores of rupees to the Church.

The deal in question concerns the sale of three acres of land in Kochi by the Ernakulam archdiocese in 2016 to repay a Rs 60-crore bank loan it had taken to build a medical college. The agent appointed by the church to conduct the deal had estimated the value of the land at Rs 27.30 crore, but the church has so far received only Rs 9.13 crore of that amount. However, priests and lay people critical of the action claim that the plot was actually worth at least Rs 80 crores.

Much water has  flown down the Ganges since the above hearing and  while upholding the verdicts of two lower courts, early this month, the Kerala High Court ordered Cardinal Alencherry to face trial for the sale of various holdings of Ernakulam-Angmaly Archdiocese four years ago.

The Syro-Malabar Church's contention that only the Pope has the authority to take action against a Cardinal does not hold water.  If the Kerala High Court finds the Cardinal guilty of all charges of breach of faith and clandestine sale of church property, then the Cardinal might be sentenced to up to 30 years' jail term and will be the first Cardinal to don this feather on his cap.  On 10th October 2012 the Kerala High Court had ruled that "Parishioners, independently or together as a committee of administrators, are competent to represent the parish and claim rights over the property of the church" (in the instant case 'Mukkad Thirukudumba' Church, Sakthikulangara, Kollam). The court held in its judgment that the competence of the Plaintiffs (Parishioners) cannot be doubted even by going by Canon Law, and less so by the law applicable to India. "Church and its properties would not vest in the Pope or  the Archbishop and the maxim – Rome has spoken, case is closed – no  longer survives, observed the Court.

Going by Kerala High Court observations it is highly likely that Humpty Dumpty is indeed going to have a  great fall in the Supreme Court. Isaac Gomes, Associate Editor, Church Citizens' Voice. 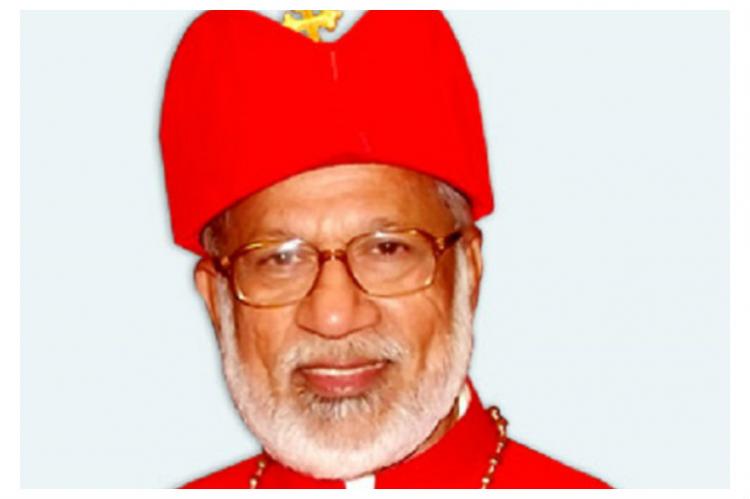 The court case against Cardinal George Alencherry in Kerala, in South India, should be seen as part of the Church’s process of evolution in India, or perhaps across Asia and beyond.

Early this month, while upholding the verdicts of two lower courts, Kerala High Court ordered Cardinal Alencherry to face trial for the sale of various holdings of Ernakulam-Angmaly Archdiocese four years ago.

The court refused to accept that bishops have independent and exclusive right to own and alienate church properties, even if such acts are done according to internal laws of the Church. The ownership and rights depend on civil laws, the court affirmed.

A Catholic layman in the archdiocese had filed cases, slapping at least nine criminal charges on the cardinal including conspiracy, breach of trust, fraud and forgery.

The cardinal’s lawyers have decided to move the Supreme Court against the order. But legal experts say the chances of the charges being dropped are thin because the principle of law demands that a person accused and charged in a court of law is considered innocent until a trial proves him/her guilty.

If Cardinal Alencherry faces trial, he will be the first cardinal to do so in an Asian civil court. Even if that does not happen, the case will still be a landmark as the cardinal becomes the first Catholic bishop to face criminal charges for selling church properties in India.

If convicted of all the charges, he may face more than 30 years in jail.

Several Catholic officials are surprised at the turn of events because it is normal for bishops to make decisions on the sale of church properties and execute them along with diocesan bodies. They wonder why the cardinal should face a criminal trial.

That’s exactly why they should pay attention to the case.

The cardinal may be a victim of the Indian Church’s history of negligent attitudes toward laypeople’s rights and being blind to people’s growing awareness of their entitlements. The superiority Indian clerics ascribe to themselves has kept them blind to the fast-developing sense of human equality in civil society.

The court refused to accept the cardinal’s canon law-based argument that he is the “corporation sole” for the church properties and the laws bestow him the power to alienate properties at his will. The court said an emphatic no and stressed such actions amount to a criminal breach of trust.

The court took the case to an entirely different realm analyzing a bishop’s temporal authority. A fundamental concern of the court was the shared ownership of laypeople in church properties.

The court’s order, which indirectly says every member of the Church has an equal right to its properties, will have far-reaching consequences on the way the Church understands and operates its assets.

The court noted that the “firm stand” of the cardinal “is that being the spiritual head, he is bound by canon law alone and not general law.”

The cardinal's lawyers quoted church laws, traditions and court judgments of previous cases to argue that Catholic bishops have the authority to acquire, own and alienate diocesan properties.

“All juridic persons (read dioceses, convents, monasteries, etc) are capable of acquiring, possessing, administering and alienating temporal goods in accordance with the norm of canon law,” says the code 1009 of Canon Law of the Oriental Churches.

The Latin-rite Church has a similar law. “The Church has the inherent right, independently of any secular power, to acquire, retain, administer and alienate temporal goods, in pursuit of its proper objectives,” says the Latin Church’s Canon 1254/1.

The cardinal argued that since church law empowers him to alienate church properties, a layperson has no right or duty to question it, and therefore the order of the lower courts may be overturned and the charges withdrawn.

The court refused to accept the argument. It wanted to understand “what actually amounts to spiritual and temporal matters” in relation to the concept of “government of temporalities of the Church.”

The court agreed that “the prime authority is vested” in the spiritual head of a church concerning temporal and spiritual affairs, and is governed by church laws based “on the theory of the apostolic succession of Jesus Christ.”

However, this right “will not include the right to alienate the property vested in endowment,” the court said. A bishop’s religious supremacy should be understood as “confined to religious matters both temporal and spiritual governed by ecclesiastical law.”

The bishop’s temporal right may include acquiring or alienating properties that are directly connected with the spiritual affairs of the Church. In all other matters, particularly in the alienation of immovable property, civil laws will apply, the court said.

The lands Cardinal Alencherry sold were “not the subject of any religious observances or places of worship based on the theory of apostolic succession” and it “must be understood that the possession, right, title over the properties would stand governed by the general law and not by the canon law.”

The court concluded that Cardinal Alencherry, who became the archbishop of Ernakulam-Angamaly 10 years ago, has no valid possession, right or title over the archdiocesan properties that he sold.

The sale deeds were executed ostensibly for establishing a medical college with the objective of charitable intent. Besides, there was no written trust deed either appointing or authorizing any particular person to do so.

The deeds were executed by the petitioner (Cardinal Alencherry) based on a self-declared title under a settlement deed without disclosing how right, title or interest over the property had been acquired, the court noted.

The deeds were executed without a public auction or public sale with notice to all concerned, including the parishioners and those intending to purchase the property.

Such an action curtailed the right to derive maximum consideration for the coffers of the Church and resulted in giving the property to certain selected persons at “a throwaway price capriciously and at the whims and fancies of the petitioner [cardinal],” the court said.

The court’s observations have wider implications. Civil society now understands that bishops have no absolute right over diocesan properties. This could change the way the Church operates.

Can a diocese sell church property to meet court expenses for the sex abuse crimes of its clergy and pay compensation? Can a religious congregation expel a member, who has contributed to its wealth, without paying compensation?

The Church’s concept of its resources should evolve to understand the rights of its members over it. Cardinal Alencherry’s case is just a fact of history.

The views expressed in this article are those of the author and do not necessarily reflect the official editorial position of UCA News.