Cardinal to be tried for sex abuse? CCV Editorial 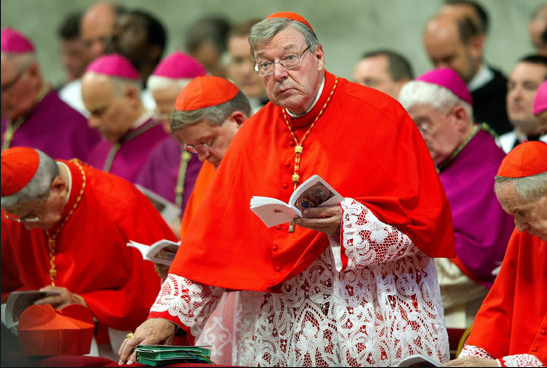 dr. james kottoor “Cardinal George Pell may be about to go on trial, but the Catholic Church is on trial too” says the editorial in Tablet and rightly. Because the Catholic church prides itself as the authentic Church, among thousands, founded by Jesus and all others, fake.

What affects the good name of the “Prince of the Church” (cardinal are called so) must affect the rest of the family. “One who exalts  himself will be humbled and the humble will be exalted” is the Gospel warning. The graded hierarchy of the church from laity, clergy, bishop, cardinal etc. is man-made to show off its pomp and splendor, like a peacock, which itself is most unchristian.

In doing this the Catholic church is like the Pharisee praying in the temple making odious comparison with the humble publican who went out justified before God. Francis papa is an exception as he calls himself a sinner and kneels humbly even before non-Catholic bishop to get his blessing.

All the thousands of churches are weeds in the Vineyard of the Lord, which is the whole world. Organised religions and churches are for the organizers who created them for the benefit of the organizers.  According to many learned theologians, definitely Jesus never established a hierarchical church with so many steps and grades in a ladder as in Indian Caste system. The clergy-laity divide itself is baseless and Fr. Joseph Mattam sj has written articles in CCV to prove it. So is the case with priesthood itself which when demythologized vanishes in thin air, according to experts today.

Followers of Jesus are to be just brothers and sisters – all equals, nothing more or less — without anyone trying to lord over others. Church-made and imposed celibacy itself similarly must  and will go. Those who created it make themselves a laughing stock, because of their inability or constant failure to observe what they prescribe for others. So sex related scandals among the  Church’s “princely class”, may be God’s way to shame them in public and correct a prodigal Catholic Church. So we should welcome the trial of Pell. Gold is tested in fire to prove its purity.

In spite of many good things Cardinal Pell has done to straighten out the Vatican finances, all of which stand to his credit, let justice be done to get him out of all allegations. “Fiat justitia, ruat coelum!” Even if the heavens were to fall, let justice be done, as the  ancient proverb and Tablet editorial say. james kottoor, editor, ccv.

Cardinal Pell on trial The Church will also be on Trial – Editorial in the Tablet UK, 29 June 2017

Disturbing and dispiriting though it is, the news from Australia today that the law will now take its course should be welcomed.The rumours and accusations swirling around Cardinal Pell for several years will now be put before a court of law.

The stories of those who allege wrong doing will now be listened to and their evidence will be heard before a judge. The Cardinal will be able to respond to the allegations against him. If he has been guilty of child sexual abuse, there must be a reckoning. Justice demands nothing less.

It has been announced that Cardinal Pell, who Pope Francis brought to Rome from Australia in February 2014 to clean up the Vatican’s finances, is "taking leave" from his job as Prefect of the Secretariat of the Economy. When charges against a priest are issued in relation to sexual abuse allegations he is immediately stood down and does not perform any public liturgical ministry pending the outcome of the case.

This should be the case whether the accused is a deacon, a priest, a bishop or a cardinal. Cardinal Pell has made valuable progress in sorting out some aspects of the Vatican's tangled financial institutions, but now he has to resign from his post, and a successor found quickly – or the reforms he has instituted may run into the sand.  It is the responsibility of Pope Francis to ensure that the important work the Cardinal has been doing in Rome is driven forward.

The Australian criminal justice system also faces a challenge. Both in reaching a decision whether to prosecute and in putting the allegations before a jury – and in selecting one that can try the case fairly – it will not be easy for the police and legal system to ignore the enormous weight of public prejudice that is already being brought to bear against Cardinal Pell.

Whatever the details of the criminal allegations he has to answer to, there has been public clamour in Australia – for several years – demanding if not the Cardinal's actual head, at least the utter destruction of his good name and public reputation. Cardinal Pell has the same right to due process and the presumption of innocence as every citizen.

Cardinal Pell has become emblematic of the kind of Catholicism that Australian anti-Catholics most detest, and there are many who would like to destroy him and in doing so inflict as much damage as possible on the Catholic Church. But the Church has handed them much of the ammunition they need, by its shameful individual and collective response to the sexual abuse of children by priests.

As in Ireland, many church leaders in Australia seemed to lose sight of the Gospel, putting the defence of the reputation of the Church at the top of their priorities. Towards the victims there was callous myopia and amnesia at best. This cruelty towards the most vulnerable, hurt by the very people who should have protected them, will be neither forgotten nor forgiven.

These are dark and depressing days for the Catholic Church in Australia. Even if it learns from past failures and applies all the lessons – primarily that victims and survivors must always come first – recovery will not be quick or easy. A long hard road lies ahead, for Cardinal Pell and indeed for the whole Church.