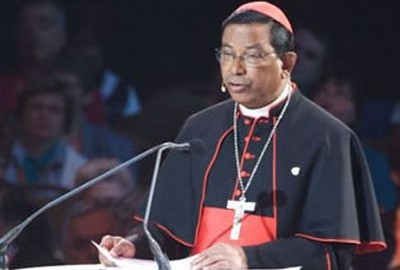 Cardinal Telesphore P Toppo has urged Christians to become more humane and follow a set of virtues that will help them become closer to Jesus.
Cardinal Toppo in his homely during the opening of the Jubilee Year of Mercy at St Mary Cathedral Church in Ranch, Dec. 13 called upon the Christians to use this year to become more closer to God.
He also asked them to follow a set of virtues, including feeding the hungry, giving shelter to the homeless, visiting patients, visiting convicts in jail and guiding the misguided in spiritual matters, to become true sons and daughters of Christ.
Shedding light on the growing trend of violence and hatred in the world he said, “we are living in the midst of violence and hatred”.
According to him millions of people have become homeless and are forced to migrate to other places.
On account of unemployment in the rural areas, he notes, besides young boys, girls too are forced to move to urban cities for employment and often they get exploited and harassed in many ways.
“The root cause of all these inhuman tendencies and gradual decline of virtues of compassion, love, fortitude, humility and justice,” he said.
“Unless we inculcate and promote these virtues, we cannot make any progress in our lives and bring peace and harmony in the society,” he said.
“Justice will prevail only when there is presence of God in our lives,” he said urging the Christians to stick to the teachings of Lord Jesus Christ and become messengers of peace in the world where violence has taken the place of peace.
On the occasion, auxiliary Bishop Theodore Mascarenhas Mascarenhas of Ranchi said, “the Jubilee Year of Mercy is a good opportunity for the Christians to experience the abundant love of God.”

According to the prelate, Cardinal too was stressing on the need for the Christians to strictly follow the Kingdom Values for leading a fortified true Christian life based of peace, harmony and brotherhood.
Pope Francis has declared a Jubilee Year of Mercy in the Church from Dec. 8 till Nov. 20, 2016.