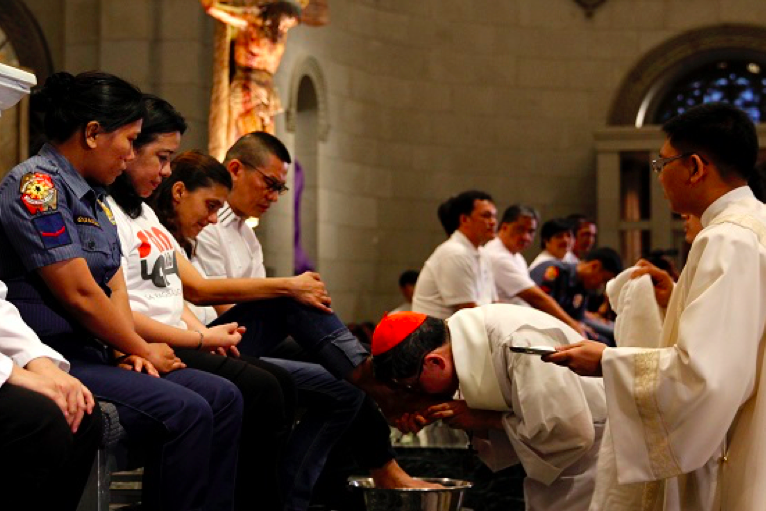 [In the Pic: Cardinal Luis Antonio Tagle of Manila kisses the foot of one of the “apostles” who were represented by former drug addicts, police officers, community leaders, and a mother of a victim of summary execution during a Holy Thursday ritual. (ucanews.com photo)]

(Note: We are publishing the example of the Philippine Cardinal Tagle, solely to highlight, how the Syromalabar Church in Kerala, stands out as an ‘odd man out’, always an exception to the general rule. The Latin Church in Kerla, India and all over the world readily and willingly follows the example and instruction of the humble Pope Francis, But the Syro malabar church would not. They are literally ZERO when it comes to be humble and willing to be led by an elightened Pope.

Cardonal Tagle went even to the extend of imitating Francis saying: “We are all sinners.”  But our Zeros are too  conscious of their being heavenly and saintly and so would not admit to be sinners, imitating this 21st century Pope who says”I am a sinner.” This reminds us of the description Pinaray Vijayan once slapped on Syromalbar bishops “Nikirshta Jeevikal” (detestable creatures). We are inclined to think he was not far away from the truth. A certain Pharisaical pride always prompts them to say, we are not like the rest in the Catholic Church, but something better, superior, a Brahminic class, like the Pharisee in the Temple. That  makes a whole lot of people to loath them.

You may say what you like, but they are not going to get the message, it looks. We can only pray for them saying: “Lord that they may see the truth”,  and humility alone is Truth, that humility which drives one to be in the forefront, to wash the feet of even the criminals and drug addicts. Women in Kerala definitely are not that bad to terrorize Zero Bishops not to touch their feet. Syromalabar versions of “untouchability?” But we have to live in hope and pray for them, even if that would mean to die in despair. james kottoor, editor)

Cardinal Luis Antonio Tagle of Manila washed and kissed the feet of former drug addicts, police officers, and a mother of a victim of summary execution during a Holy Thursday ritual.

"We're just like them," said Cardinal Tagle in his homily during the Mass of the Lord's Supper at the Manila Cathedral. "We all have dirty feet that Jesus needs to wash," he said.

The Holy Thursday ritual was a reenactment of the gesture of Jesus, when he washed the feet of his apostles before his passion and death and asked them to do the same to others.

Cardinal Tagle said Jesus' example of humility provides a practical example for his followers to love even those who do not deserve it.

"My dear brothers and sisters, even with our dirty and wounded feet, Jesus will always be with us," said the prelate who also washed and kissed the feet of police officers and village officials. "[They] believe that every life is important that's why they will help those who want to change," said Cardinal Tagle.

He described as "a painful journey" the experience of one woman who lost her son in the spate of drug-related killings around the national capital Manila in recent months.

On Good Friday, Cardinal Tagle reminded the faithful who joined a "penitential walk for life" to "fight the culture of death" with the "culture of love."

"Let us not allow a culture, where killing becomes natural to spread, because we might get used to it," the Manila prelate told a gathering of some 4,000 people outside the Manila Cathedral.

"Life is offering the self for others. That is the kind of culture that we will use to counter the culture of death," added the prelate.

He also urged the people not to remain as "mere spectators" but to "do something in our small ways on how we can further strengthen and propagate the culture of love, care, support, and respect that promotes life."

Cardinal Tagle made the call amid a growing outcry among church leaders and human rights activists over the spate of drug-related killings in the country in recent months.

He likened the experience of many people to the suffering of Jesus who faced "all forms of deaths" since he was a child until his death on the cross.

"Jesus was killed. What is saddening is the death he experienced continues until this very day," said the prelate, adding that Filipinos should not allow their fellowmen to suffer the same fate.