Cardinal Sarah: ‘Priests are not obliged to wash women’s feet on Holy Thursday’ 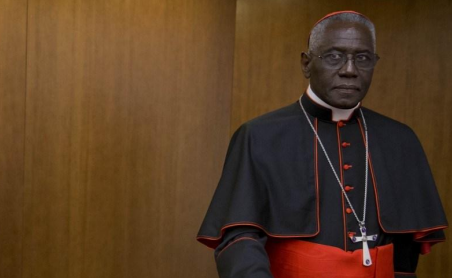 Cardinal Sarah, Prefect of the Congregation for Divine Worship and the Discipline of the Sacraments (PA) The Vatican liturgy chief reportedly said that priests should act according to their own conscience. Priests are not obliged to wash the feet of women during the Mass of the Lord's Supper on Holy Thursday, the prefect of the Congregation for Divine Worship and Discipline of the Sacraments has said. Cardinal Sarah told reporters in Rome last month that a priest “has to decide in accord with his own conscience, and according to the purpose for which the Lord instituted this feast”. Cardinal Sarah‟s comments follow a decree issued by Pope Francis which revises the rules for the traditional foot-washing ritual on Holy Thursday, extending the rite to include women and young girls.

The rite was celebrated separately to the Holy Thursday Mass before Pope Pius XII restored it in 1955. Before this point, women‟s feet could be washed, but only by other women.

"In my younger days I remember that AFTER the priest had symbolically washed the feet — he would bend and symbolically kiss the foot he had washed — DO NOT SEE this nowadays ????? If the priests think it is below their dignity — then STOP this whole farce which has become such a big point of discussion — all for nothing !!!!"

"Cardinal Sarah, as Prefect of the Congregation for Divine Worship and the Discipline of the Sacraments (PA), has complicated matters by his weird interpretation of the Pope‟s decree on including women in the washing of feet. His interpretation of the Pope‟s decree is absolutely uncatholic and I do not think the Pope asked for any second opinion on what he decreed. Cardinal‟s warped interpretation of the washing of women‟s feet and leaving it to the “Conscience” of any priest is only intended to show the Pope in poor light. Cardinal Sarah‟s sudden awakening of “own conscience” is derailment of the Pope‟s open demonstration of granting women equal status with men. Jesus himself said (John 13: 14-15) “Now that I, your Lord and Teacher, have washed your feet, you also should wash one another‟s feet. I have set you an example that you should do as I have done for you.” Nowhere did Jesus say that only men's feet were to be washed and women to be excluded.

What Cardinal Sarah has done is subversion of natural law of equity by scuttling the process of washing of women‟s feet along with men. One school of thought has opined that he might allow this in the privacy of his chamber instead of a public demonstration of washing and kissing the feet of women! Not only women‟s or girls‟ feet should be washed, even the feet of non-Christians (a few locals in each parish) should be washed. This will create a refreshing feeling about Christianity in the respective locality of each parish. After all when Jesus washed the feet of his disciples not one of them was a Christian!"