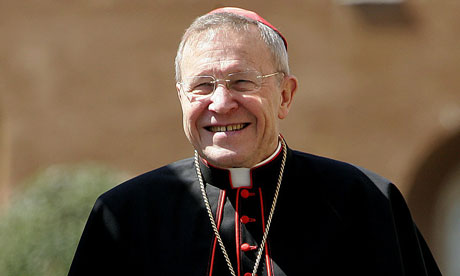 (If homosexuals, divorced and remarried, communion to the divorced etc. have been

considered peripheral issues at the Extraordinary Synod, now they are occupying central stage for heated discussion and  quick solution even before the concluding Ordinary Synod. Recently Pope Francis repeatedly said divorced and remarried are not be seen as excommunicated. Formerly these 3 groups were considered to be living in a state of sin, which Francis carefully  avoids in his vocabulary. Already last year the German bishops had said, they had reached such a pastoral decision even before Francis became Pope. That makes traditionalists led by cardinals Burke (US) and Pell (Australia) ill-at-ease. The question here is not who is going to win in this battle of wits, but whether the Good Shepherd the embodiment of Love and Care and Compassion is helped to snatch the lost sheep from jaws of the wolf and carry it home for a heavenly banquet. james kottoor, editor)

August 7, 2015 (LifeSiteNews): The developments in Europe are accelerating. One statement after another shows how high-ranking bishops and prelates are now publicly opposing the traditional moral teaching of the Catholic Church, which is based upon the teaching of Jesus Christ Himself.

First, on August 1, the Archbishop of Hamburg, Stefan Heße, came out and defended publicly a liberal attitude toward homosexual couples and “remarried” divorcees. As the official website of the German Bishops' Conference, katholisch.de, reports:

Even though he [Archbishop Heße] is still somewhat hesitant concerning the “homo-marriage,” Heße also says: “But when these people seek to be close to us, then we as Church are there for them. What else?” The Church has to cherish it when in homosexual relationships there are to be found values such as fidelity and reliability. “In my eyes, this does not minimize the love and fidelity between two people,” according to Heße. He also wishes for the remarried divorcees “livable forms for the Church's recognition and accompaniment,” without thereby giving up the ideal of marriage.

Then, only a few days later, on August 7, the President of the Swiss Bishops' Conference, Bishop Markus Büchel, came out in a public letter to all co-workers in the pastoral field, defending homosexual couples. After another Swiss bishop, Bishop Vitus Huonder, had publicly spoken about how the Old Testament condemns homosexual practices, Bishop Büchel made a statement distancing himself from such views. In this statement, the Swiss Bishop says:

For the promotion of the good of the person, it is less decisive whether someone has a hetero- or homosexual inclination; rather, the responsible approach to sexuality and all the other dimensions of a relationship (such as attentiveness, carefulness, respect, or fidelity) is decisive. Here we are permitted, as Catholic faithful, to trust the conscience of each individual. Let us rejoice about every relationship in which the partners accept one another as equal, valuable, beloved children of God and respect the dignity of the other and promote the well-being of the persons!

Bishop Büchel continues to stress that to respect the dignity of the human person “also means not to reduce a person and his relationships to the mere sexual question.” He also referred, once more, to Jesus' teaching according to which love and affection are predominant. The bishop also stressed that at Biblical times, people did not know that homosexuality is a biological inclination and “not a freely chosen sexual orientation.” These statements are in full accord with the themes and statements of the recent May 25 “Shadow Council” which was organized, among others, by the President of the Swiss Bishops' Conference himself. The German pro-life activist and author, Mathias von Gersdorff, comments upon this statement: “Herewith, he [Büchel] contradicts in a straightforward way the moral teaching on sexuality of the Catholic Church and most probably also the Christian anthropology.”

Last but not least, a Spanish bishop has today caused a great stir by announcing that he will allow a transsexual to become the godparent at an upcoming baptism. As the Swiss website kath.ch reported, the bishop of Cádiz, Spain, Rafael Zornoza, has given permission to the 21-year-old Alex Salinas to become the godparent of her nephew.

This decision came after a national petition was launched in defense of Salinas who first had been denied to become a godparent because she does not live according to the Church's moral teaching. More than 35,000 people signed the petition in favor of Salinas. Now the diocese declared that “being transsexual does not constitute a reason for being excluded from the office of a godfather,” as kath.ch reports. Salinas himself comments on the new decision, according to the Spanish newspaper El País:

I don’t know if the pope saw my petition – I have no knowledge about that – but of course the entire Church is changing. In fact, they just said that divorced Catholics cannot be excommunicated and I think it is wonderful that the Church is taking a new route.

All these reports come out at a time where Pope Francis himself repeatedly speaks about the importance of welcoming “remarried” divorcees in the parishes and not to have any negative attitude toward them and their children without once mentioning – as a pastor for all – that they live, objectively speaking, in the state of sin. Many concerned Catholics pray and hope that he will soon speak an authoritative word in order to defend, amidst this growing moral anarchy, the teaching of Jesus Christ Himself, as Cardinal Raymond Burke requested nearly a year ago.