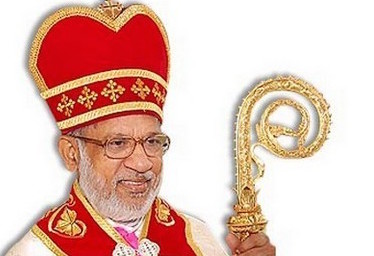 Cardinal Alencherry was delivering homily for the liturgy during Synod of Bishops on Tuesday.

Vatican city (UCAN): Cardinal George Alencherry reminded the Synod of bishops that the pastors of the Church are called to take upon their lives "a prophetic role of suffering."
The Major Archbishop of Ernakulam-Angamaly and President of the Synod of the Syro-Malabar Church was delivering homily for the liturgy during third General Congregation of the XIV Ordinary General Assembly of the Synod of Bishops on Tuesday.
Below please find the full text of Cardinal George Alencherry’s homily during Terce at the third General Congregation of the Synod of Bishops:
Holy Father and My dear friends,
The reading from Jeremiah 22:3, gives us a message very much applicable to the goal of our Synodal deliberations on family. Prophet Jeremiah uttered a few oracles to the royal family of Judah cautioning the King against the ruin that may fall upon the Kingdom, if the King does not render Justice and righteousness and save the oppressed from the hand of the oppressor. Josiah and Jehoiakim were the Kings of Judah, at that time. We know that both of them were weak Kings, and Nebuchadnezzar, the King of Babylon destroyed the Kingdom of Judah and the temple. Owing to the failures of the Kings the people were driven to exile and all the sufferings arising there from. Josiah and Nebuchadnezzar, the Kings of Judah could not render justice and righteousness and save the oppressed from the hand of the oppressor. Justice means the acceptance of the reign of God and righteousness is the grace of God resulting from the acceptance of God’s reign. The Kings of Judah failed in their responsibility to give justice and righteousness to the people due to which the people had to suffer the consequences.
The words of the prophet are applicable to rulers and leaders of all the times and also to the people governed by them. In many countries of the world people are denied of justice and righteousness by the promotion of individualism, hedonism and oppression by secularist values and lines of action. The question arises whether the leaders of the Church have come forward with a prophetic role like that of Jeremiah to support the people by the Word of God and by personal witness.
Jeremiah had to suffer at the cost of his prophetic role. His life was a symbol of the message he gave. Suffering and ruin, he had to take upon himself. He was asked to accept three signs in his life: not to marry, not to attend funerals and not to attend parties.
Do not take a wife (16:2): Jeremiah is not to experience the deep love of a bride, for the bride, Israel, has rejected Yahweh’s love. He must experience loneliness, as Yahweh experiences loneliness. In Christian times, celibacy becomes a sign.
Do not go into a house where there is mourning (16:5): Jeremiah is not to mourn or show compassion to the dead, because Yahweh has lost all feelings for his people. They will die unlamented.
Do not go into a house where there is a celebration (16:8): Jeremiah is not to join any celebration, because there is nothing to celebrate. Jeremiah is called to lead a terrible life, no wonder he goes into deep depression and bitter lament (cf. 20: 7ff). It is not easy to be a prophet. (The New Community Bible, St Paul Publications, Mumbai, India)
The pastors of the Church in the present times are called to take upon their lives a prophetic role of suffering and kenosis, similar to that of prophet Jeremiah. The words of Holy Father Pope Francis in Evangelii Gaudium (n. 49) become meaningful here.
“I prefer a Church which is bruised, hurting and dirty because it has been out on the streets, rather than a Church which is unhealthy from being confined and from clinging to its own security. I do not want a Church concerned with being at the centre and then ends by being caught up in a web of obsessions and procedures. If something should rightly disturb us and trouble our consciences, it is the fact that so many of our brothers and sisters are living without the strength, light and consolation born of friendship with Jesus Christ, without a community of faith to support them, without meaning and a goal in life. More than by fear of going astray, my hope is that we will be moved by the fear of remaining shut up within structures which give us a false sense of security, within rules which make us harsh judges, within habits which make us feel safe, while at our door people are starving and Jesus does not tire of saying to us: ‘Give them something to eat’ (Mk 6:37).”