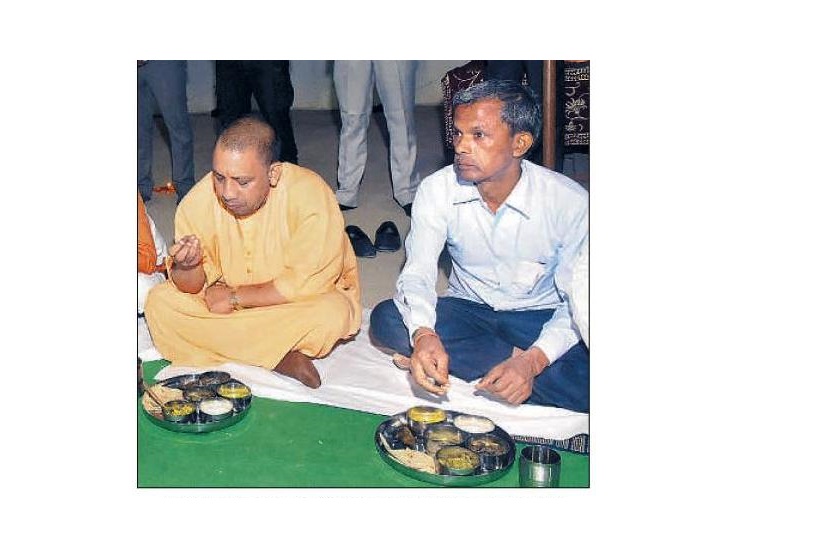 The report in today's

Telegraph Calcutta is self-explanatory, about the politics being played on the bonhomie with Dalit communities.  It is for the Indian citizens to judge before the 2019 election, whose heart really pines for the poor and the downtrodden. Empowerment whether it be of Dalits, or those on the periphery of the society or even women, will not come from any political party.  The proof of the pudding is the Women's Reservation Bill or The Constitution (108th Amendment) Bill, 2008 which has not been passed by the Parliament even almost after a decade. In the process it is a lapsed bill in the Pariament of India which proposed to amend the Constitution of India to reserve 33% of all seats in the Lower house of Parliament of India, the Lok Sabha, and in all state legislative assemblies for women. The Rajya Sabha passed the bill on 9 March 2010. However, the Lok Sabha never voted on the bill. The bill lapsed after the dissolution of the 15th Lok Sabha in 2014. Since coming to power, the current NDA government is mum on the matter in spite of trumpeting "Beti Bachao, Beti Padao!"

In light of the above hyprocrisy on the part of the government – both UPA and the NDA – it is the poople who have to empower themselves, in small communities, ideally through self-help groups, in collaboration with like-minded NGOs whom the government is trying to black out, for fear of them seeing the ground reality of selective pampering or selective elimination of those who do not fall in line with Patriotism (read Majoritarianism) . Isaac Gomes, Asso. Editor, CCV.

Lucknow: A BJP Lok Sabha member has accused her party's leaders of "ridiculing and insulting" Dalits by carrying pre-cooked meals to their homes and eating there "in the name of breaking the caste barrier" . "Leaders are taking meals cooked in five- star hotels to the doors of the Scheduled Castes and eating there. They are ridiculing and insulting the Scheduled Castes," Savitri Bai Phoole told reporters in Bahraich, her constituency, on Friday.

She seemed to also imply that these BJP leaders were practising untouchability.

"They hire caterers, rent utensils and deploy their own people to serve the meal. The Dalits are kept at bay," she said.

Phoole added: "The poor are insulted repeatedly by being reminded they are from the Scheduled Castes. I am an MP of this country but I am identified as a Scheduled Caste MP." She suggested her party leaders should visit Dalit homes "without prior information and eat whatever has been cooked in their kitchen, even if it is just roti and salt or rice and dal".

"The idea is to identify localities with substantial Scheduled Caste populations that are still awaiting development.  All the leaders are supposed to spend nights in those localities and mix with the people," he said.

"I suggest the Bahraich MP follow the (party) decision so that the poor can be empowered." Phoole's comments back up claims by many Dalits that BJP leaders had "picnicked" outside at their homes, eating food brought from hotels or cooked by caterers.

Rajnish Kumar, a Dalit from Lohgarh in Aligarh district, has alleged that state minister Suresh Rana had arrived at his home with more than 100 people at 11pm on Monday and told him they wanted to dine in front of the house.

"Everything was brought from a hotel. They ate matar paneer, pulao, tandoori roti and gulab jamuns . They drank bottled water brought from outside," media reports quoted Kumar as saying.

Kumar said he was asked to sit in a corner and have his share of the food.

Rana, however, said it was Kumar who had requested him to eat at his home. "Some of the food was cooked by the family and some of it was brought from outside," he told reporters.

On Tuesday, Union minister Uma Bharti had skipped a scheduled meal with Dalits at an event in a Madhya Pradesh village, saying she was not Ram who would purify people by eating with them.

She later apologised, claiming she had not known she was supposed to eat at the event and pleading she needed to rush to an urgent appointment elsewhere. She, however, invited the Dalits to a meal at her home in Delhi.

It was Rahul Gandhi who started the trend of politicians eating at Dalit homes about a decade ago. He also invited friends from India and abroad to spend nights in Dalit hamlets.

In 2009, Rahul and British politician David Miliband had met self- help groups in Amethi and both had spent the night at Dalit homes, prompting BJP accusations of  "showcasing India's poverty to the world".

Sting in the tale

An Uttar Pradesh minister on Friday lauded BJP leaders for visiting Dalit homes and braving "mosquito bites the whole night", all for the sake of educating the community about government welfare schemes.

"Ministers have to face mosquito bites the whole night, still they visit the villages and feel happy about it," PTI quoted basic education minister Anupama Jaiswal as saying.

If a minister gets an opportunity to hold two chaupals (village meetings), he wants to organise four more, she added.