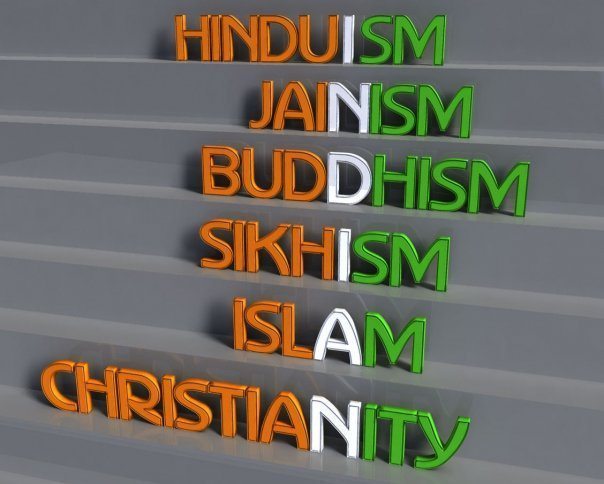 ‘One thing ought to be done and the other should not be omitted’. (Hoc opportet facere et illud non omittere) is the Axim. The conflict in practice is between reason and blind belief, day and night, life and suicide, religion and politics. What will you do then?

Separate and assign them to their areas of competence to avoid conflict as nature has done separating day from night forcing the living to open the eyes during day and to shut them at night? This is the essence of true secularism which forbids religion to play  spoil sport in politics.

But how can this  be applied to the Bharat of Gandhiji who drew all his strength for a ‘non-violent’ political liberation struggle, from his ardent spiritual, religious convictions distilled from all religions, including specially from Christianity? He could do it since he pursued Truth, Merit and Reason in politics and public life and confined religious beliefs and practices to each one’s private life.

This is what most western democracies starting with France are doing while  India plays the role of a tragic comedian trying to please all and ending up displeasing all!  The end result is, Indian secularism is neither flesh nor fish. In India Babas, Tyagies, Gurus are selected for political posts like MPs and CMs. The  UP CM is more a head of a Mutt, full time, than a CM, part time only.

What is happening in India is not separation of religion and politics  but mixing them up, which is forbidden by the constitution. The present BJP government is doing it to perfection, while the Congress headed by Rahul and previously by PMs like Indira, Narasimha Rao and leaders of other political parties, are not far behind. The only exceptions were Nehru and Ambedkar.

The question is: how to make Indian politics truly secular? For that we the people, the voting public must change our herd mentality to vote in only statesmen like Nehru and Ambedkar as our political leaders and masters. To reach it, the voting public must be educated first, because democracy can function  properly only in an enlightened environment. We in india have miles to go to create that environment.  james kottoor, editor ccv

Appointment of so-called spiritual leaders as MP ministers is worrying. The Madhya Pradesh government’s appointments are worrying in light of the recent large-scale scandals involving babas and ammas.

The Madhya Pradesh (MP) government recently announced that Computer Baba, Bhayujji Maharaj, Narmada Nand, Hari Haranand Pandit and Yogendra Mahant will lead the initiative of cleaning the river Narmada as state ministers. Surprisingly, two of these newly-appointed state ministers had announced a Narmada Ghotala Yatra to expose the delay in cleaning the Narmada and protest the state government’s failure to keep its promise of planting six crore samplings on the river’s banks. This co-option by the MP government has successfully defused the Narmada Ghotala Yatra.

Mixing of religion and politics is not new but the MP government seems to be scaling new heights in this respect. There is scarcely any need to dig deep to find out the credentials of these babas. Namdev Das Tyagi calls himself Computer Baba because of his love for computers and modern gadgets. He also claims that his memory is like that of a computer. By that logic, there can be millions of computer babas and ammain our country. Another self-proclaimed saint is Bhaiyujji Maharaj. He has enjoyed proximity to both the BJP and Congress in the past. Last year, he announced retirement from the spiritual field. He is known for his lavish lifestyle.

The Madhya Pradesh government’s appointments are worrying in light of the recent large-scale scandals involving babas and ammas. On Wednesday, a Jodhpur court sentenced Asaram Bapu to life imprisonment in a rape case. The havoc created by the followers of Ram Rahim and Rampal is not a very distant memory. Allegations of sexual exploitation against Virendra Dev Dixit are well-known. By no stretch of the imagination do I want to claim that all babas and ammas are involved in fraudulent practises. But the way many of these cults are organised, and their proximity to political big wigs, make scrutiny of their deeds almost impossible — in fact, a potentially life-threatening proposition.

We have diverged from the principle of separation of politics and religion, enshrined in the Constitution. Jawaharlal Nehru’s opposition to the then President of India Rajendra Prasad’s decision to attend the renovation ceremony of the Somanth temple seems unimaginable in the current times. Nehru had said that a person holding a constitutional post should not betray any religious affiliation. B R Ambedkar was also a passionate advocate for the separation of religion and politics.

The principle of the secular state is one of the core principles of the Indian Constitution. This means that an individual has the right to choose his/her religion but the government should always keep its distance from religious affairs. It is not surprising that the BJP does not stick to secular principles, but the change in the Congress’s outlook from Nehru’s days signals a serious climbdown. Rahul Gandhi did rounds of temples as part of an election campaign in Gujarat. But this transition is not sudden. Several Congress leaders in the past were known to be followers of babas and ammas. Indira Gandhi was a keen follower of Dhirendra Brahmachari, P V Narasimha Rao was known for his proximity to Chandra Swami and some Congress leaders were followers of Satya Sai Baba.

Narendra Dabholkar, Govind Pansare, M M Kalburgi and Gauri Lankesh, who opposed fraudulent practices in the name of religion and demanded separation of state from religion, were murdered. The delay in investigating their murders raises difficult questions of the Congress and BJP.

In an era of populist politics, it is difficult to imagine that politicians will stop collaborating with the babas and ammas until people express displeasure at these so-called spiritual leaders. Though the Constitution has given citizens the right to practice their faith it is also their responsibility to inculcate scientific temperament, spirit of inquiry and humanism.

The writer is a member of the Maharashtra Andhashraddha Nirmoolan Samiti.