Note: It seems that Shri Pamplanil was carried away as if in a sudden stroke of thoughts. He it seems to me, is completing what Dr Valson Thampu has left untouched, giving us an opportunity to see what exactly is Islam. A very good article from Shri Pamplanil, good by every measure – joseph Mattappally, Asso. editor CCV 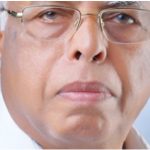 I read with keen interest the erudite articles of Dr. Valson Thampu.

His observations on the shallowness of the prelates of  Syro-Malabar Church have hit the bulls eye. To quote Shakespeare’s Macbeth, their verbiage  is “full of sound and fury, signifying nothing.”

I chanced to  observe the happenings at a diocesan headquarters of the Catholic Church at close range. I found that the clerics, by all large, are not moral with reference to the standards  anchored in humanistic values, which I try to emulate .

I hold the premise that all social institutions including religious organisations are the products of a given socio-politico-economic milieu of a specific region. Simple common sense postulates that there cannot be any god revealed and mandated religion. Time and place impinge the evolution of moral standards and they are subject to change. The moral code of a particular region or a particular population can’t be transported and transplanted to another region. Like everything else, moral values  undergo mutations, pari-passus, to converge with changing attitudes and perceptions. I subscribe to the view held by Giordano Bruno, who at the cost of his life, being burned alive at the stake, said that there is no ABSOLUTE TRUTH, contrary to the position then held by the Catholic Church.

The  sympathy shown by Dr. Thampu  to his perceived Muslim brothers and sisters, seems to be rather misplaced. The track record of the followers of Islam in India may not deserve sympathy for their present predicament in the country. All things considered, they alone are primarily responsible for the plight they are in. Their mental makeup seems to verge to obstinacy and obduracy. They tend to be at loggerheads with others who live in India. They refuse, in general, to integrate; are averse to change; do not fall in line with the ethos of the land they happen to be living, whether it is in India, U. K., France or other countries whose ideas, ideals, beliefs and practices are different. Viva la difference!

Muslims, with rare exceptions, seem to walk about with their nose in the air; prone to exhibit superiority complex: they think their religion is  a cut above of other religions. The same mindset is seen among a good number of Christians also. The world is worst for it.

Muslims persist to hold on to tenaciously, the religious practices crystallised more than 1400 years ago in another context and environment. Their symbols are that of the desert. They seem to arrogate themselves to be the followers of the only true god and only true religion; their life mission is total Islamisation of the entire world. Evangelisation is the legit motif of Christianity too.

Islam emerged in the deserts of Arabia among constantly feuding tribes. It is a religion with the concept of a single god as against the “one in three, three in one” illogical Christian godhead. The Prophet is considered only as a spokesperson of god and not any virgin born son of god and god himself. That set apart Islam from many other religions particularly Christianity.

Prophet Mohammed succeeded to a  great extend to bring semblance  of order to the chaotic and mutually antagonistic tribes of his region. His prescriptions were  suitable for life in the desert of those times.

Ideas are in perpetual motion, flux and dynamic,  never static. It is new ideas that lead us to the staircase of progress. Otherwise, human kind would not have moved out of caves, ceased to be Hunter-gatherer and discarded stone tools. If any group tries to tether the world to some  fossilised ideas, our civilisation will be put on hold. In a multipolar world insistence of a single yardstick of values would result in disequilibrium in the social sphere. Even animals do adapt to new situations; Charles Darwin had empirically proved.

By temperament, I hesitate to  comment on the activities of people of other religious persuasions. The shenanigans in the religion in which, by a biological accident, I happened to be born, keep my plate full.

It would seem that our country is heading for dire troubles. As a very  senior citizen, I think it is my bounden duty to share a few thoughts of mine. I am acutely aware of my insignificance vis-à-vis  the vast polity of our country. But I am told that even the tiny fluttering of a butterfly will reverberate throughout the whole world, albeit imperceptibly.

I am far from being the supporter of the hidden agenda of the Bania-Brahmin unholy nexus  and their view of the Indian society. The RSS/ Sangh Parivar is bent upon the marginalisation of Muslims, isolating and confining them to ghettos for the wrongs done by Muslim invaders in the past. It reminds me of the twisted logic in the story of the wolf and the lamb.

The steps in the anvil are calibrated to segregate and isolate a significant segment of the population of India. In the process large number of helpless Muslims may become stateless persons as happened in Assam. It would be a profound  tragedy in human terms if the fate of the Muslims in India is to be decided by the whims of some greedy, corrupt, lower division clerk in ramshackle government office with moth eaten files. It  would lead to massive displacement of a community. The result would be more horrible than that happened to the Jews under the Nazi regime; the culmination of the entrenched Christian hate towards the alleged killers of Jesus.

I  am well aware of the wanton violence, rape and murder of innocent Muslims including hapless children and women in 2002 in Gujarat. The earlier incidents  of murder and mayhem against them after the demolition of Babri Masjid are detailed in the Justice Srikrishna Commission report.

The Muslims, by virtue of the nature  of their religion are intolerant of other faiths. They unleash gratuitous violence at those whom they consider enemies and perceived injustice against them. The 26/11  terrorist attack in Mumbai by Pakistanis and bombings by Indian Muslims in Dalal Street, Dadar and at other elsewhere, bomb explosions on suburban trains in Mumbai by indigenous Muslims are only few examples. Did any Muslim living in  India raise his voice against the wanton murder of innocents, the horrendous 9/11 destruction of the World Trade Center in New York and the London bombing of July 2007 (I was in Greater London at that time)? The acts of terror committed by the followers of Islam are beyond counting.

Pursue the history of Islam from its inception. They do everything  to convert the followers of other faiths to their faith, even at the point of sword. A substantial portion of the oil wealth is earmarked for this purpose.They strongly believe, to  the point of obsession , that their god is the only true one and theirs is the only true religion. They relentlessly try to overwhelm the world and eradicate other faiths. They want to have world hegemony at the earliest.

Among   themselves the  Sunnies and Shias are at each other’s throats. What is happening  in Yemen is the prime example. The Ahmedias are persecuted without  any human consideration. They are on a mission with fanatic zeal to smother the Christian Europe by resorting to breeding in very large numbers.

History has shown that religion has abysmally failed to usher in an  egalitarian social order. The prolonged religious wars in Europe between Catholics and Protestants is prime example. One denomination of Christians views other factions with murderous hatred and fight the other group with all the fangs bared. So much for the universal brotherhood claimed to have been exhorted by  Jesus, who is deemed as god incarnate to redeem the world.

In his book “End of Faith” Sam Harris succinctly observes  that human kind may annihilate themselves, not  because it is written in the stars, but because it is  written in the books touted as god given. The most dangerous specimens of homo sapients are the people of the Book. Terrorists exhibit  extraordinary insane religious fervour as a prelude to bombings, stabbing and other despicable acts of violence on defenceless innocents. They are assured of 72 virgins in their heaven to quench their unbridled lust by murdering apostates and  kafirs.

By and large  Muslims are under the total  control of their religious leaders. Madrasa education seems to breed insularity and foster convoluted ideas. This  applies to the catechism instructions of Christians too. Less of conventional region seems to be good for humanity.

We breathe the air of this land, we drink the water that comes out of this earth, and eat the crops grown in  this land. Years ago I told Abdul Ghani Dawood Wagle (Wagle is the surname of Maharashtra Brahmin), my office  assistant that one should not spite the earth that sustains us. Come what may, we should be million times loyal to our country. One should not identify with one’s co-religionists elsewhere. To put it bluntly, an Indian should never carry the flag of Pakistan.

I am profoundly sorry,  if I have hurt the feelings of anyone. My motive is not to cause any offence to anybody. All things considered, I had  to to do what I did. At the age of 80, I may not have many more miles to walk.

A big thank  you.