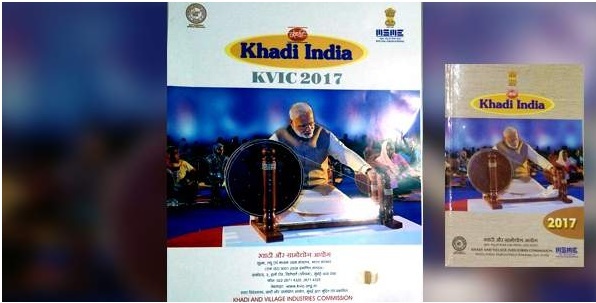 (Note: The picture above and report below are signs of  changing times that we are through.Change is essential for growth. Growth through change must be the motto, but certain changes should be done slowly in small doses, not giving more than one can digest.

It is great if Modi becomes the brand ambassador to promote Khadi but not by effacing someone greater. All gave full support for chasing out black money, but some saw it as throwing out the baby with the bathwater. The report below shows the many unwarranted shockwaves it created among different sections of people. The following is what we saw in social media.

A twitter on Modi image on Khadi Calendar reads: “Shame. India never had such a disgustingly attention seeking PM,” another goes still further: “Chor modi, first you took the dress of Nehru, then his jacket and now you have the audacity of replacing Gandhi from Khadi.” Of course that could not have been his intention at all. Festina Lennte, (hasten slowly) should be the method to make change digestible and acceptable. James Kottoor, editor).

MUMBAI: In a surprise development, Prime Minister Narendra Modi has “ejected” Father of the Nation Mahatma Gandhi in the 2017 wall calendar and table diary published by the Khadi Village Industries Commission (KVIC). Most employees and officials were taken aback to see the cover photo of the calendar and diary showing Modi weaving khadi on a large ‘charkha’, in the same classic pose as Gandhiji.

While Gandhi’s historic picture weaving khadi on a simple charkha, wearing his trademark loin cloth, is legendary and imprinted in the minds of the masses since generations, Modi comes across in his signature attire of kurta-pyjama-waistcoat, weaving khadi on a slightly modern charkha.

When contacted KVIC Chairman Vinai Kumar Saxena said this was “not unusual” and there have been deviations in the past.Workers at KVIC here have expressed their resentment over the use of Prime Minister Narendra Modi’s photograph on the cover of KVIC calendar and dairy. However, KVIC authorities have hailed Modi as the new brand ambassador for Khadi.

Employees of KVIC at its headquarters in Vile Parle here staged “a silent soul-cleansing” by wearing black bands on their mouths during lunch hour on Thursday to protest the decision to use Modi’s photograph in place of that of Mahatma Gandhi.“This is a systematic attempt to phase out Mahatma. Modi’s photograph was used on last year’s calendar also. After our protest, we were assured that it would not be repeated. But, this year it is a complete wash-out,” a senior KVIC staff member said.

KVIC chairman V K SaCxena defended the decision. “Gandhi is the soul of the KVIC. He is inseparable, as the entire industry is based on his philosophy and ideals,” he said, adding that Modi is the biggest brand ambassador of Khadi now.  “Our aim is to popularise Khadi.

Modi is doing that. Several initiatives taken by him are generating more employment in the sector. He is also a youth icon. All these things were considered before using his picture,” Saxena said.