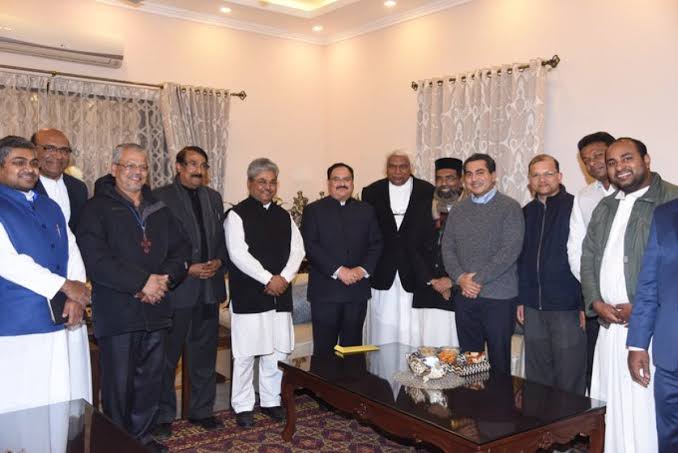 In an attempt to change the narrative amongst Christians on Citizenship Amendment Act, BJP President JP Nadda met about 15 pastors of Christian community in Delhi

It is a very good indication that BJP Working President Jagat Prakash Nadda came forward to meet Church leaders in Delhi. Dialogue, Debate and  respect for Dissent are the indicators of healthy democracy.  While Mr Nadda explained NDA's point of view on Citizens' Amendment Act (CAA), the 15 pastors expressed their points of view.  They emphasised that the ambit of CAA should be all-inclusive and the geographical area must be expanded from only three countries which are Pakistan, Bangladesh, and Afghanistan.  The point is will the Indian Church take the responsibility of feeding and nuturing all those they want NDA Government to India, in deference to as John 21:17  where Jesus ordered Peter "Feed my sheep?."  Or they will just give advice only?

They must also answer which Islamic country respects Minority Rights. Can they give similar advice to China which has quarantined all followers of Islam? Can they also assure that Franco Mulakkal would not seek asylum of another country on grounds of religious persecution in India, if he is sentenced on repeat sexual exploitation of the nun in Kerala?  They should thank their stars that the NDA is silent on this issue.

Under CAA as it stands, Muslims in India who were born and brought up in India, have nothing to fear.  Why is the Church insisting on formal invitation from the Government?  Have we not heard of backdoor parleys as one of the means of constructive dialogue – both in national and international politics?  Why is the Church playing with fire to the detriment of its flock?  Isaac Gomes, Asso. Editor, Church Citizens' Voice.

In an attempt to change the narrative amongst Christians on the Citizenship Amendment Act, BJP President JP Nadda met around 15 pastors of the Christian community in Delhi along with BJP Vice President Dushyant Gautam and Tom Vadakkan on Monday evening at his Motilal Nehru Marg residence. However, all those who met the BJP President expressed their displeasure with the Citizenship Amendment Act.

To warm up the priests to him, Nadda spoke about his time at the convent school St Xavier’s in Patna and reminisced about his time with the Jesuit priests who run the school. Then, Nadda said that the CAA was only to ensure that citizenship is granted to persecuted people from across the border. He said he wanted to clarify and change the misinformation spreading on the Act and that he wanted to ensure the priests understood it. BJP had also considered Christian persecution in these countries and that is why the community was also included, Nadda added.

“We told him that CAA is incomplete, if everyone is not included, then it is an incomplete Act,” added Williams. There was no one there who supported the Act unlike what BJP stated, underscored Williams.

Another priest who was at the 45-minute-long meeting but did not want to share his name said, “We told Nadda that this Act was passed without any discussion. There was no consensus. We have to go to the people, discuss and only then should anything become a law. We told him that we are in a secular India, so no law should discriminate.” He added that they were served tea, coffee, barfi and nuts.

“We told Nadda that there are other persecuted groups such as Ahmadiyyas and Rohingyas who are targeted in our neighbouring countries. We questioned why only three countries were included when there are Christians being persecuted in Myanmar too,” said the priest.

Fr Denzil Fernandes, director of Indian Social Institute, who was also present at the meeting said that after Nadda explained the CAA to them, he said that BJP was arguing from the point of view of persecuted minorities and that BJP was being humanitarian.

“We expressed concerns about the Act. We told him that we have problems with the selective nature of choosing certain communities of certain countries. We argued that if such a law should come about, it should be religion-neutral. The law cannot be selective. There are Burmese refugees also who are persecuted. Any law which is based on religion is highly problematic. The law should be expanded,” highlighted Fr Fernandes.

This meeting at the BJP President’s house included priests from Methodist, Jacobite, Marthoma and Catholic churches in Delhi. Initially, this meeting was to include major Christian councils and bishops. The first round of calls went to bishops of the Malankara Catholic Church, Churches of North India (CNI), Methodist Church, Marthoma Church, Orthodox Church and National Council of Churches in India. However, most of them requested for a formal invite and an agenda of the meeting. When a formal invite wasn’t sent, several of them did not attend the Monday meeting.