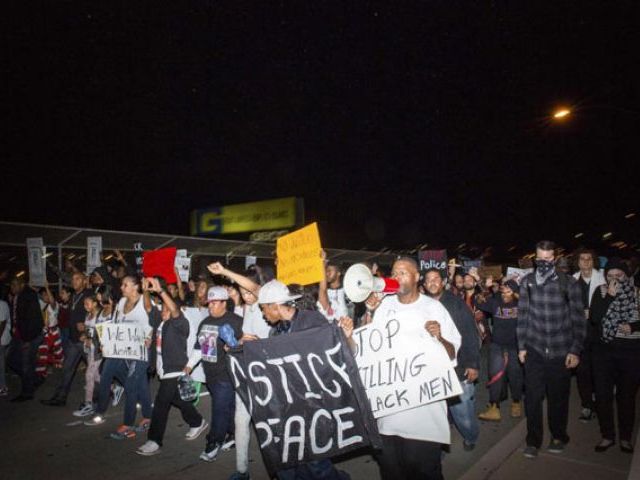 Representational image (File/AFP)
(Note: Black lives matter, more, all lives matter! All men are created equal, is what US constitution says. “Except those who are black” is the unwritten one, others say. US is the land of democracy, but their own writers define it as “Government of hypocrites, by hypocrites, for hypocrites.” Colour blindness is ingrained in American psyche as caste division, ill-treatment and exploitation is in ingrained in India. Are our politicians any less hypocritical? They all preach one thing and practice just the opposite. How can a US which cannot clamp down on gun control, give leadership to a war against ISIS? All of us starting with US,Russia, UK, France, India should first put our house in order before cleaning our neighbor’s house.Similarly Modiji should concentrate more at home than abroad. But it is very shameful that shoot outs in US is almost a daily affair just as caste-based killings and ill-treatment happen often in India. You and I are equally to blame if we don’t even raise word of protest, or write a word (in the case of the literate) against these atrocities. james kottoo, editor)

Chicago: Racial tensions soared in two US cities Tuesday after three white men opened fire on a Black Lives Matter protest in Minneapolis and a Chicago police officer was charged with murder for shooting a black teen.

Five people were wounded, though none gravely, when the gunmen opened fire Monday night at the Minneapolis protest, police said. Black Lives Matter Minneapolis vowed to continue its daily demonstrations protesting the fatal police shooting of Jamar Clark, 24, whom they said was handcuffed when he was shot in the head on November 15.

"White supremacists attacked the #4thPrecinctShutDown in an act of domestic terrorism," the group wrote on its Facebook page. "We won't be intimidated." Meanwhile, the mayor of Chicago called for calm ahead of the release of a "hideout" video showing officer Jason Van Dyke fire 16 bullets into Laquan McDonald, 17.
A judge ordered the Chicago police dashcam video released to the public no later than Wednesday.Van Dyke was charged with first degree murder Tuesday, the Chicago Tribune reported. It will be the first time a Chicago police officer has been charged with first-degree murder for an on-duty fatality in more than 30 years, the newspaper said.

"We trust police officers to provide safety, build trust and uphold the law. If you violate that you're going to be held accountable," Mayor Rahm Emanuel told reporters Monday."This is a violation of your conscience and it is wrong and it is hideous." Emanuel spoke with community leaders and urged them to remind residents to express their right to protest in a "responsible, focused, peaceful way so your voices and your ideas are heard."

The city approved a 5 million settlement for McDonald's family in April and federal authorities have said they are investigating the case.His family has said they do not want the video released because it will be too painful to see it played over and over again on the news."My nephew is shot in the back and all of those other places 16 times. Even when he was on the ground, the officer was still shooting him," McDonald's uncle, Shyrell Johnson, told WGN-TV last week.

Police have said McDonald was high on PCP, acting erratically and lunged at the officers with a knife."Despite the graphic nature of the video, we're confident that my client's actions were not only lawful, but also within department policy and within his training," Van Dyke's attorney, Daniel Herbert, told reporters last week.