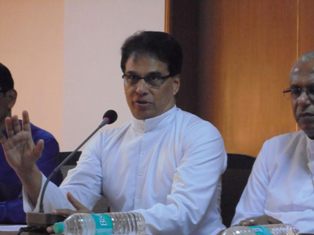 Bangalore: The final statement of the 32nd assembly of the Catholic Bishops’ Conference of India (CBCI) which concluded here on March 9 hardly makes any reference to the attacks on churches and related people in the country.

Barring a line expressing “…our sorrow over the killing of innocent people by extremists in India…” the statement has no mention about church attacks.

When his attention was drawn to a recent attack on a church in Raipur at a media conference organized on the last day of the March 2-9 assembly, CBCI president Cardinal Baselios Mar Cleemis said that in India, temples and mosques are also attacked.

Answering to a question related to the murder of the rector of the Pontifical Seminary in Bangalore nearly three years ago, the cardinal said the matter was discussed not during the CBCI assembly but at Karnataka Catholic Bishops’ Council meeting.

While expressing solidarity and sharing the sorrow with the murdered Father K J Thomas’ family, the cardinal said that the matter is in the court, and the Church will wait for its verdict.

“As the Church respects the judiciary in India, we leave it to the judicial process to take the final decision,” he added.

The assembly statement concluded saying, “As authentic citizens of the country, we repose our confidence in the democratic values and Constitution of India.”

The statement has reiterated the CBCI’s education policy that the educational institutions need to “rise above the maintenance mode to impart holistic education with a heart for the poor and the marginalized.”

Father Paul V. Parathazham, director of St. John’s National Academy of Health Sciences, Bangalore, one of the CBCI national centers, told the media conference that his institution ensures providing MBBS seats to a number of students from economically poor and rural background.

He announced that the government has increased the number of MBBS seats of the St John’s medical college from 60 to 150.

Father Paul clarified that the institution does not accept capitation free or donations and all admissions are done purely on the basis of merit.

Out of the 150 seats, 20 are for religious sisters, ten are for dalit students and one for a differently-abled.

A student applying with a recommendation letter for a medical seat is disqualified, Father Parathazham said.

St John’s is credited to be one of the best medical colleges in the country.

The CBCI statement asserted that it wants to promote higher education institutions in India to cultivate persons of character and conviction and quality leadership for upholding the constitutional values and the socialistic, secular and democratic character of the country.

The statement, endorsed by 178 Catholic bishops from 171 dioceses, appealed to all people of goodwill to join hands to work for a better Church and a better society.