Bishop’s scandal a rude awakening for Church in Indonesia 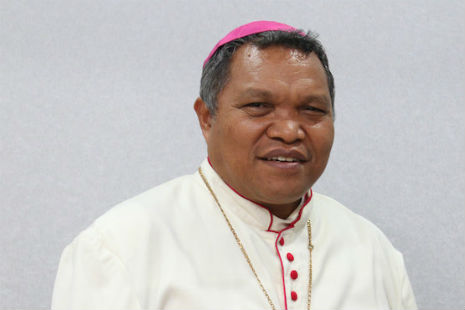 Cover image: Bishop Hubertus Leteng of Ruteng resigned on October 11 amid allegations of having a mistress and misappropriating church funds. (Photo courtesy of Indonesian Bishops Conference)

The resignation of Bishop Hubertus Leteng shows the Catholic hierarchy cannot ignore the views and influence of the laity which constitute more than 85% of the Catholic Church.

His Holiness Pope Emeritus Benedict XVI wrote in his message dated 10th August 2012 to the 6th Assembly of the International Catholic Forum, that the Laity "should be considered not as `collaborators' with the Clergy but as persons truly `co-responsible' for the being and activity of the Church".  "Feel the commitment to work for the Church's mission to be your own: through prayer, through study, through active participation in eccelesial life, through an attentive and positive gaze at the world, in continual search for the signs of times."  He urged the Laity on active co-responsibility with one's  own pastors (cf. Vatican Council II, Decree on the Apostolate of Lay People Apostolicam Actuositatem, n. 20). by having the courage to make even demanding proposals.

It is time members of the Laity (especially from India) known as Sleeping Giants, woke up from their slumber and emulated their counterparts in Indonesia. They did exactly as Pope Emeritus Benedict XVI had urged the Laity to do.

We welcome feedback from CCV readers on the Pope Emeritus' wake up call in the context of the Indonesian case study and the stony silence of the Indian Church hierarchy on similar happenings, especially lack of financial transparency.  Isaac Gomes, Asso. Editor, Church Citizens' Voice.

Controversial Bishop Hubertus Leteng of Ruteng Diocese on the Indonesian island of Flores resigned on October 11, amid allegations of sexual misconduct and misappropriation of funds.

Rumours had circulated since 2014 that Leteng had an illicit relationship with a woman and that he had borrowed $90,000 from the Indonesian Bishops' Conference (KWI) without the knowledge of other curia members.

It was also rumoured that he had taken $30,000 from the diocese.

The bishop denied having an affair in meetings with his priests but admitted borrowing the money to send a poor boy to study in the United States. His failure – or rather unwillingness – to reveal the identity of the boy, however, only lent more credibility to the illicit relationship allegations.

The rest is history. Leteng, 58, became the first Indonesian bishop to quit under a sexual misconduct and fund misappropriation cloud.

A priest who attended a meeting between Vatican representatives and Bishop Leteng earlier on October 11 implied that the bishop was told to resign or be fired.

He said the word dismissal was used in a letter from the Vatican read out at the meeting prior to Leteng's resignation being officially announced.

His departure was needed urgently and he had only himself to blame. The allegations against him had hurt people's religious feelings, tarnished the church, and divided his priests and Catholics in general in the diocese.

In June, dozens of his priests resigned en masse from their posts after Leteng ignored a no-confidence petition they had submitted.

Some prominent Catholic leaders also publicly called for his removal with some going as far as investigating the allegations and submitting their findings to the Vatican.

Days after Leteng resigned, some of his supporters suggested on social media that some of the priests pushing for the bishop's removal were guilty of sexual misconduct.

Against this backdrop, keeping Leteng at his post would do more harm than good to the church. In fact, his departure came too late as embarrassing details about his alleged misconduct had circulated widely.

This in itself is good news and church leaders should welcome this as it shows people care about the church, which was the main motive behind people's noisy but critical take on the Leteng scandal.

Forget about the way or means, but when some lay people took the initiative to investigate Leteng's activities they were telling the world that they belong to and care about the church. They also sent a message to church leaders that they would get more involved in church affairs.

The laity were also reminding church leaders that their authority – and that of the church – lies with having a high moral standing and not in power or wealth the church may command.

The Leteng scandal is a rude awakening for the church that people are critical and will scrutinize activities within it. It is also a warning of what may happen when they start asking religious leaders to account for their actions.

This kind of reminder is necessary because in most parts of the world, many churchmen, no matter what rung of the hierarchical ladder they are on, feel they are above scrutiny.

Very often, the clergy does not only control or monopolize church matters but also feels and acts like it is the church itself. In most cases, priests or people within the hierarchy have the final say, even in cases they have little knowledge about such as finance.

Lay people are now knocking at the church's door. They are reminding church leaders that they too are legitimate members of the church and want to be involved in all aspects of church life. In other words, they want to be active in the church.

Ideally, the hierarchy and church leaders would welcome this development. As an institution, the church has grown into a complex entity and the participation of lay people would not only help it to function effectively but could also reinvigorate it.

But even without being active in the daily operations of the church, lay people will still exert change by being critical and using social media to assess church policies or decisions.

In Bishop Leteng's case, the Vatican was forced into a fresh round of consultations after local people expressed dissatisfaction over the Vatican's decision to have him present in the first consultation.

Leteng's case also demonstrated local church leaders need to learn how to communicate and use the media – mainstream and social media – in managing a crisis.

Since the rumors started circulating in 2014, Bishop Leteng largely adopted a no-talk-to-the-media approach, avoiding both mainstream and social media.

In so doing, Leteng missed an opportunity to clarify or even to deny the rumours outright and deprived his supporters of the opportunity to try and quash the allegations. In the end, that strategy also undermined his authority to lead the diocese effectively.

It's high time for religious leaders and future church leaders to learn how to talk to and use the media, not only to manage a crisis but also to advance pastoral work. In a society as mobile as ours, preaching from the pulpit or altar is no longer adequate to appeal to the faithful.

In hindsight, though, Bishop Leteng's case may be a blessing in disguise as it managed to force people to care about and play an active role in the church. Time will tell if we owe him a big, big thank you.

Kanis Dursin is a freelance journalist based in Jakarta, Indonesia.