Bishops to delve into ways to revitalize liturgical life 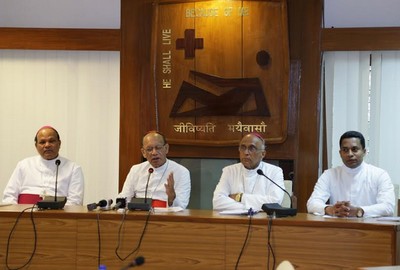 The discussions will be part of the week-long 27th Plenary Assembly of the Conference of Catholic Bishops of India (CCBI) which begins from today.

140 Catholic bishops from across the country will gather in Bangaluru to chalk out ways to revitalize the liturgical life of the priests, religious and laity for renewal and meaningful worship service.

The discussions will be part of the week-long 27th Plenary Assembly of the Conference of Catholic Bishops of India (CCBI) which begins from today.

“Liturgy is the way we pray. There is need to make prayers more participatory and more effective,” Cardinal Oswald Gracias, CCBI president, told a press conference.

Cardinal Gracias said that best international experts on liturgy- Archbishop Arthur Roche, Secretary of the Congregation for Divine Worship and the Discipline of the Sacraments (from the Vatican) and Archbishop Protase Rugambwa, President of Pontifical Mission Societies and Adjunct Secretary to the Congregation for the Evangelization of Peoples- will address the conference on ‘Liturgy and Life’.

Archbishop Salvatore Pennacchio, Apostolic Nuncio to India and Nepal, will inaugurate the event at St. John’s Nursing College Auditorium in the presence of bishops from 131 Latin Rite Dioceses in the country.

Bishop Varghese Chakkalakal of Calicut, CCBI Secretary General, said that 'liturgy is not mere ritual. But it should help to take people to God and help build interpersonal relationships.”

“Liturgy is not reciting prayers. It has to make our prayers meaningful,” pointed Archbishop Bernard Moras of Bangalore.

Though Second Vatican Council gave a green signal for inculturation, Cardinal Oswald Gracias, said that Indian Church has to take it forward from the present situation.

Responding to questions on Ghar Wapsi (home coming), Cardinal Gracias said: “reports on Ghar Wapsi campaign show a clear element of threat and force. This is unacceptable. The freedom of conscience and human rights is being trampled upon by Ghar Wapsi.”

Cardinal Gracias further pointed out that “the silence of the government on Ghar Wapsi is frustrating and disappointing.”