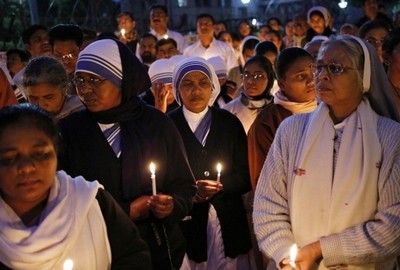 Delhi (UCAN):Two ministers arrested while holding a prayer service in Madhya Pradesh state.Anti-Christian harassment has become extremely worrying in Madhya Pradesh, a Catholic bishop said after two Protestant ministers were arrested while conducting a family prayer service.
"The situation in the state is extremely worrying for Christians," Bishop Gerald Almeida of Jabalpur told ucanews.com Sept. 7 after the Revs. Sunny Oommen and John Alexander of the Church of North India were arrested while praying at the home of Kapoor Chand Jairam in Kesla village of Seoni district the day before.
The ministers were taken to the local police station, charged and kept there for more than five hours despite Jairam telling police that the ministers came to his house on his invitation and that the service did not involve conversion activities.
The police, however, registered a case of attempt to convert through allurement under the state's stringent anti-conversion law.
According to the law, it is a crime to convert without prior permission from government officials. Offering an inducement in order to convert a person from one religion to another is a criminal offense.
The police case is based on a complaint alleging that the pastors paid Jairam 10,000 rupees (US$150) to abandon his Hindu religion and become Christian.
Jairam told ucanews.com that he and his family have been following the Christian faith for the past 15 years ever since prayers to Jesus helped cope with a crisis. However, they have not joined any particular Christian denomination, he said.
"The police case is based on a fake complaint. We went to Jairam's house on his invitation to pray," the Rev. Oommen told ucanews.com.
While praying, some 150 activists belonging to the Bajrang Dal gathered, shouting pro-Hindu slogans and verbally abusing the ministers, accusing them of taking part in an illegal conversion, he said. The Bajrang Dal is a militant Hindu organization and youth wing of the Vishva Hindu Parishad (world Hindu council)
Police later arrived and arrested the ministers.
A constable at the local police station told ucanews.com on conditions of anonymity that members of some right-wing Hindu groups were pressuring officials to register a case against the ministers.
Bishop Almedia said such attacks, which occur regularly in the state, "is a matter of serious worry" for Christians.
He said attacks against Christians have increased after the pro-Hindu Bharatiya Janata Party (BJP) came to power in Madhya Pradesh. The party is seen as the political wing of Hindu hardliners working to create a Hindu theocratic state.
"The law and order situation in the state has almost collapsed as government officials act (in a) biased manner against Christians," said the bishop whose diocese is in the state. "When a family cannot sit together and pray, you can imagine the situation," he added.
Christian leaders said there have been at least 100 attacks on Christians since the BJP came to power in 2003, with more than 20 occurring in the last six months.
But police have not acted on any of the complaints nor arrested anyone for the attacks despite being provided evidence.
"We cannot predict what will happened to us," Bishop Almedia said but added that Christians will "continue to uphold the law of the land."
Richard James, the Madhya Pradesh spokesman of the National Christian Forum said "the (Indian) constitution guarantees following any religion of our choice and the radicals are infringing upon our rights." Hence, such such issues will be legally dealt with, he added.
Source: UCAN