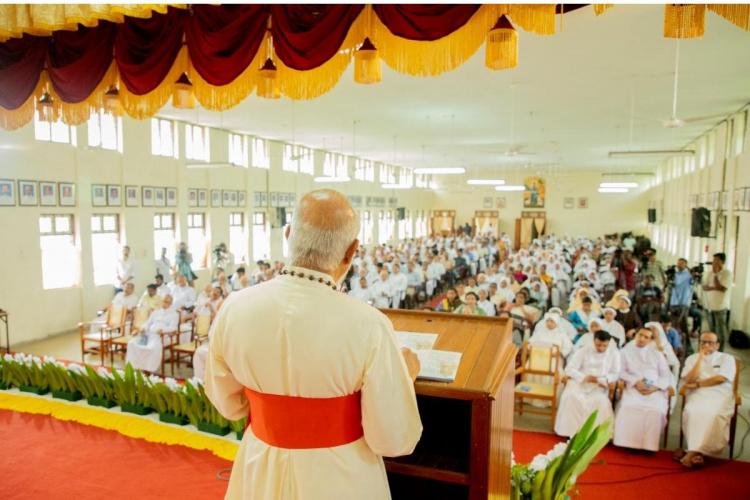 The Palai diocese under Syro-Malabar Catholic Church issued a circular stating that a family with five or more children are eligible for a monthly financial support of Rs 1500, and other benefits.

A circular issued by Bishop Mar Joseph Kallarangatt of Palai diocese on July 27 offering financial and educational support to families having five or more children has triggered a major controversy in Kerala. Amidst allegations of sabotaging the family planning programmes of the country, the eparchy of Palai under Syro-Malabar Catholic Church widely circulated the message among the laity via social media on August 1. In the absence of mass gatherings in religious institutions due to the COVID-19 pandemic-related restrictions, the diocese turned to WhatsApp to take the message to the laity.

Though the Catholic Church brushed off the controversy as a circular issued as part of ‘Amoris Laetitia’ (year of family) announced by Pope Francis, many called it regressive. Chevalier Adv. VC Sebastian, Secretary, Council for Laity, Catholic Bishops' Conference of India (CBCI), said that the circular did not intend to promote population growth in the community. “The Pope announced that the period from March 19, 2021 to March 19, 2022, should be observed as a year of family. It intends to provide welfare support to families and keep them close to the Church. Most of these schemes announced now are not new. If it was to encourage population boom, there was no need to mention that the scheme will be available to children born in 2000,” he said.

As per the circular, a family with five or more children are eligible for a monthly financial support of Rs 1500. It also offered to include children from larger families in the priority list for jobs in Church-run institutions, waive tuition fee at engineering and nursing colleges under the Palai diocese.

Sebastian said that there is concern over the declining birth rate in the community. “The Economic Department’s vital statistics report shows a clear decline in the birth rate of the Christian community. As per our assessment, migration, backwardness created by decline in the price of agricultural products and lack of reservation in government jobs have contributed to this trend,” he said, adding that the circular was unrelated to the issue of birth rate.

A member of Palai diocese said that the circular reached them through church-related WhatsApp groups. “Most of us felt that the Bishop courted unwanted controversy through such an open statement. If the intention was to help poor families at the time of pandemic, there were several other options. It does not have any impact among ordinary members of the Christian community,” said the community member on the condition of anonymity.

Writer Paul Zacharia said that the circular may not be Catholic Church’s opinion, but it may have come from the CBCI or the Cardinal. “I may be wrong, but this seems to be the individual opinion of the Palai Bishop. It is a human rights violation to reduce the responsibility of women to giving birth and raising five or more children. It will take up a major part of a woman’s life. If there is coercion, it becomes a very serious issue,” he said.

Pointing to the glorious history of the diocese, which took a leadership role in education in the early ‘50s, Zacharia said, “The Palai diocese has a history of establishing the St Thomas College in the early 1950s and Alphonsa College for women later. Its alumni are spread across the world. It is ridiculous to expect that the community would change on such a meagre offer."

S Bettymol Mathew, writer, assistant professor and head of Malayalam department at VTM NSS College Dhanuvachapuram, said that attempts like these are enough to backtrack the progress achieved by women all these years. “Not any revolution, but the introduction of contraceptives gave women a sense of freedom and equality. In Kerala, the Christian community took the first initiative to educate their daughters. Defying norms, they accepted the nursing profession and even sent their daughters abroad. This happened parallelly to the family planning programme in the ‘70s,” she said, adding, “Now consider the case of a family of five kids, a woman will lose minimum 15 years in terms of delivery and child care. First it will affect career and eventually the higher education prospects of women.”

Betty said that the Church has been making similar recommendations since the mid-2000s.

“The shrinking population of priests and nuns has been a concern for the Church ever since families started limiting sending one or two children to the Church. There are not enough people to take care of the huge properties owned by churches in the form of convents, hospitals and schools. Also the wages received by qualified priests and nuns from their profession, which was a major source of income, too is depleting. That is one major worry for the Church which triggered them to intervene in very private matters like the sex life of couples,” she said.

The circular also comes on the back of growing discontent between Muslims and Christians in the state. If social media discussions are an indication, vote bank politics and disparity in minority welfare schemes are creating tussles between the two minority communities.

Turkish President Recep Tayyip Erdogan’s decision last year to turn Hagia Sophia, a museum in Instanbul into a mosque had a bigger impact in Kerala than any other part of India. The Hagia Sophia, which was originally a Byzantine church built in the sixth century was converted into a mosque in the 15th century before being a declared a museum in 1934. An opinion piece by IUML leader Panakkad Sadiq Ali Shihab Thangal published in the party mouthpiece Chandrika allegedly supported the regressive stand of Erdogan. Political observers viewed IUML’s support for Erdogan as another move further straining the Christian-Muslim relationship in the state, which was already weakened over the ‘love jihad’ bogey. Coined by exponents of Hindutva, ‘love jihad’ is a false narrative to target Muslims. They allege that Muslim men lure, seduce and trap Hindu or Chirstian women by pretending to be in love with them only to compel them to convert to Islam to get married. Officially, the Indian government has  denied that anything called ‘love jihad’ exists.

Political scientist and former Vice Chancellor of Central University G Gopakumar said that the tussles between the minority communities began with the love jihad controversy. “The Church sees the increase in population as an option to resolve issues like the minority scholarship. While family planning was introduced in the 1960s, people in the state welcomed it voluntarily. High education and exposure to foreign countries are the reasons for Kerala’s decision. What we learn from the example of China is that such progressive steps are irreversible. Once a community embraces progressive moves like family planning, there is no turning back. Only the Muslim community is showing some aberration on this, but changes are happening there too,” he said.

In May, the Kerala High Court struck down the state Directorate of Minority Welfare Board’s order distributing minority scholarships to Muslim and Latin Catholic and Converted Christian students at the ratio of 80:20. Months later, on August 4, the Pinarayi Vijayan government decided to appeal the verdict. The High Court’s order and the state government’s decision to appeal have sparked tension in the Christian community. “We have no concerns over the government filing an appeal. We have good faith in Indian constitution,” said Sebastian, adding that all government schemes related to minority welfare and not just the scholarship were skewed disproportionately to Muslims.

Following allegations that the Muslim community is being given undue share in minority welfare schemes, the state government appointed commission led by former judge justice J B Koshy to study the issues faced by Christian community.