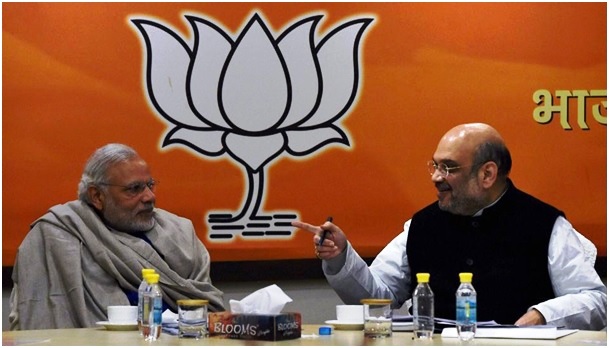 It is not a morally and intellectually bankrupt Opposition but the sheer diversity of India that offers the biggest challenge to any attempt to impose a religio-cultural homogeneity across India.

(Note: There is nothing like success and BJP wants to succeed at any cost, by hook or crook, by straightforward means or through deception. They want to capture power,  expand geographically and possibly make India Congressmukth. Of course, this is true with all political parties.  BJP is trying to excel in this art of deception. They are not overwhelmed with love and devotion for cows. Where people eat meat of cows or any other animal as in Kerala, they either keep quiet or utter nothing objectionable to win their sympathies and get their votes.

To change this situation the voting public should become wise or made to become enlightened. To unite a vast country so diverse in its beliefs and cultural practices is a herculean task. One has to start with areas where these groups with different or opposing mindset can easily agree and then proceed to educate and make them understand and agree on more things instead of imposing them against their wish and understanding. This needs patience and perseverance in promoting the good of the governed, not the gain of the government in power. What is the other alternative? Resorting to absurdity and hypocrisy to succeed. That is what is happening today.

There are many joys of living in Goa, but its gastronomic pluralism is easily one of the tiny state’s biggest attractions. On the day that RSS chief Mohan Bhagwat was calling for a national law against cow slaughter, I was having dinner with a Goa BJP minister: On the menu was fish curry, pork sorpotel and beef chilly fry. When I asked the minister how he interpreted Bhagwat’s remarks, he smiled indulgently: “Bhagwatji lives in Nagpur, we live in Goa. One India, many diets, now enjoy the food!” This was, to borrow Hyderabad MP Asaduddin Owaisi’s remark that went viral, truly an example of “yummy-mummy” beef politics.

The truth is, the BJP in Goa is a very different party to its national avatar: A Manohar Parrikar has less in common with his Haryana counterpart, Manohar Lal Khattar or with Uttar Pradesh’s Yogi Adityanath, than he does with his political rivals in Goa. Of the 13 BJP MLAs in Goa, seven are Catholics: The BJP would have been reduced to a rump if its local unit had not reached out to the minority Catholic community. In fact, it was a conscious attempt to bridge the divide with the Catholics that enabled Parrikar to lead the BJP’s first majority government in 2012. Much water has flown under the Mandovi river since then, but the fact is, Goa is the only state where the BJP has at least partly succeeded in breaking its Hindu majoritarian image.

This is at one level a reflection of demographic compulsions: At around 22% of the state’s population, Goa’s Catholics are simply too large and influential to be neglected. The BJP can get away by not giving a single Muslim a seat in the country’s most populous state, they cannot risk that prospect in Goa. In a UP, the BJP can seek to marginalise the state’s 18% Muslim population by consolidating its Hindutva constituency, but in Goa the nature of Hindu-Catholic inter-dependence is too deep-rooted for it to be swept away by any single religious ideology. In a Haryana, the BJP can come up with stringent anti-cow slaughter legislation, but they cannot do so in Goa because vote-bank politics works against such an imposition.

Indeed, as the BJP attempts to geographically expand and become a true pan-Indian party, it will be confronted with the limitations of its Hindutva belief system in a multi-cultural society. The party’s outreach in the North-east, especially in states with large tribal populations, cannot be built around its ideological core issues like Ram mandir or cow slaughter: Here, the party has attempted to create a loose federal power-sharing arrangement where Centre and State share resources in a coalitional system of mutual benefit. There is no ideological glue that binds the BJP governments in Manipur and Arunachal Pradesh with the Modi regime in Delhi apart from a desire to capture power at all costs.

A similar dissonance can be witnessed as the BJP tries to expand its footprint south of the Vindhyas into states like Kerala and Tamil Nadu. In Kerala, there have been a chorus of local BJP voices who have distanced themselves from the traditional party narrative on beef. Already, the party has been embarrassed by its former MP and RSS ideologue, Tarun Vijay’s comments on dark skin, a classic example of how a north Indian ‘Hindu-Hindi-Hindustani’ mindset is unable to embrace the Dravidian identity easily.

Which is also why it is not a morally and intellectually bankrupt Opposition but the sheer diversity of India that offers the biggest challenge to any attempt to impose a religio-cultural homogeneity across India. The RSS may visualise a Hindu rashtra but the BJP cannot afford to be similarly cavalier with the country’s republican constitution. Nor can a Narendra Modi, with his neatly cultivated ‘inclusive’ image, be seen to publicly align with divisive and violent gau-rakshak groups.

The Ambedkarite constitutional vision revolves around the notion of individual rights and freedoms that recognised India as a land of multiple identities. It is this vision that saw cow protection being placed in the directive principles and not in the fundamental rights guaranteed by the Constitution: The decision was a compromise arrived at after a vigorous debate that eventually accepted that while the cow is a sacred animal for millions of Hindus, India cannot be seen as a ‘Hindus-only’ nation.

In a discourse in June 1947, Mahatma Gandhi reflected this sentiment when he said: “How can I force anyone not to slaughter cows unless he is himself so disposed? It is not as if there are only Hindus in the Indian Union, there are Muslims, Parsis, Christians and other religious groups too.” Seventy years on, India is being asked to choose again: Between the Mahatma and the RSS sarsanghchalak’s vision of a ‘new’ India.

Post-script: A day after consuming delicious beef chilli fry in Goa, I drove into neighbouring Maharashtra, also ruled by a BJP government. Here, I could now be fined Rs 10,000 and spend five years in jail for possession or sale of beef unless I can prove the meat was imported from outside Maharashtra. Can anything be more absurd and patently hypocritical?

(Rajdeep Sardesai is a senior journalist and an author.The views expressed are his personal views).