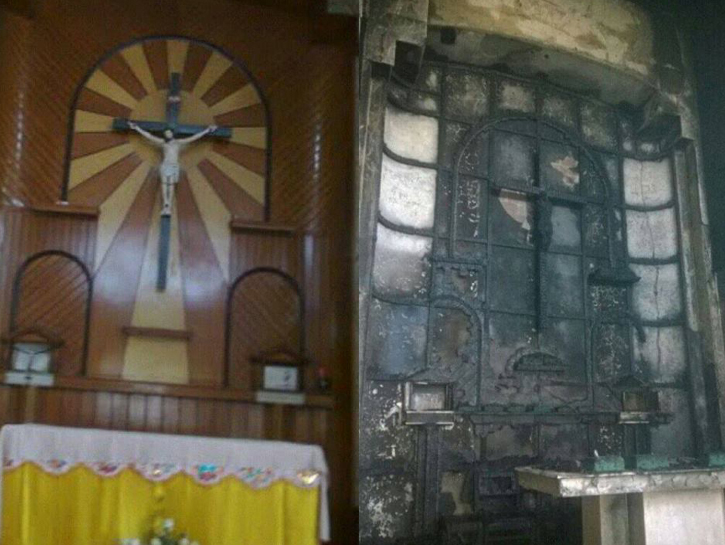 Wolf in the sheep’s clothing has abandoned its mask. The recent revolting statements against minorities, alleged attack on their worshiping places and curbs on freedom to administer their educational institutions show the real face of the rulers with a difference. Two latest instances, both almost simultaneous, send shockwaves among minorities who have been at the receiving end. The first is the ‘mysterious’ fire that gutted a church in Delhi; the other, a Union Minister’s public speech in which she categorised minorities as ‘illegitimate children’. As for the complete burning down of the interior of the church – including altar, crucifix, statues, clothes, books and furniture – the inquiry is still on and the culprits are yet to be identified. But, the prevailing atmosphere points the needle of suspicion to not ‘ordinary miscreants’ or mere ‘mischief-makers’.

The second episode, Union Minister Sadhvi Niranjan Jyoti’s sweeping statement asking people of Delhi to decide whether they should be governed by those born of Ram or those born illegitimately strikes at the very root of the secular nation. A Union Minister dared to utter such despicable words shows the protective net she has been assured of by the powers-that-be. No amount of verbal diarrhoea by her party leaders and saffron protagonists can defend the most indefensible. The fact that she remained remorseless and had to be prodded by Prime Minister Narendra Modi to express some sort of apology makes it clear that it was not a slip of tongue as it is made out to be.

There is a context to the latest developments. These are not isolated or accidental instances. There is more to it than meets the eye. Union Minister Giriraj Singh, in the run up to the Lok Sabha elections, had said: All those opposed to Mr. Modi should go to Pakistan. Rather than punishing him for his fulmination, he was made a Minister at the Centre. Bharatiya Janata Party MP Sakshi Maharaj came out with a statement that madrassas are “hubs of terror and jihadis.” Another party MP, Yogi Adityanath, had stirred controversy stating that riots happen wherever Muslims are more than 10 percent in numbers; he further said that there is no place for non-Muslims where Muslims are more than 35 percent. Referring to ‘love jihad’ he had purportedly asked supporters to convert 100 Muslim women through marriage every time a Muslim man marries a Hindu.

The deteriorating communal situation makes mockery of Prime Minister’s Independence Day call for a moratorium on communal violence for a decade. Three months down the line, communal tensions are on the rise. The saffron brigade is working overtime as if they have the green signal from the top leadership in the government and the party. As the Prime Minister is on a globe-trotting mission, selling an investor-friendly image of the country, his men and women in saffron robe are doing the opposite. Their goal seemingly is what one of the top leaders of RSS, M.S. Golwalkar, outlined in his book “We or Our Nationhood defined”– non-Hindus should stay on in this country as second-class citizens without full civil rights.