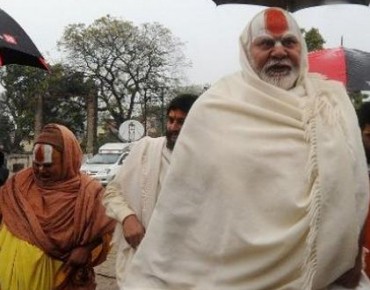 Ayodhya: Prominent sadhus in Ayodhya have stood up against forced religious reconversions by the Rashtriya Swayamsevak Sangh and its affiliated outfits, saying this kind of politics will divide the country.

“Yeh log khoon ki rajniti khel rahe hain (These people are indulging in bloody political games),” All India Akhara Parishad president Gyan Das told Scroll.in over the phone. These people are playing politics with blood. The Parishad consists of 13 akharas or ascetic orders, seven belonging to the Shaiv sect and three each to Vaishnavism and Sikhism, reported scroll.in.

Gyan Das, who is considered the most influential sadhu in Ayodhya, added, “Religion is a matter of personal faith. No one has the right to interfere in this. The RSS and its wings are committing heinous crimes by forcing members of minority communities to convert to Hinduism. They are criminals who should be booked.”

Ayodhya’s sadhus have long had a shifting relationship with the RSS and especially the Vishwa Hindu Parishad, the Sangh wing that seeks to mobilise Hindu ascetics.

In the early 1990s, the VHP succeeded in winning over a majority of Ayodhya sadhus, but after that differences surfaced between them. The divide continued until the Lok Sabha elections this year, when the sadhus once again jointly supported the Sangh and its political arm, the Bharatiya Janata Party.

However, the issue of forced conversions seems to have cleaved a rift again.

Gyan Das is not alone in Ayodhya in denouncing the forced conversions in Uttar Pradesh, though he is the most outspoken in attacking the RSS and its affiliates, the VHP and Dharma Jagaran Manch.

“Earlier, they tried to create communal conflagration in the name of Ram, and now they want to divide the nation by forcing Hinduism on the minorities,” Gyan Das said. “This is illegal and the government must take stern action against them.”

Equally vocal in his criticism is Acharya Satyendra Das, the chief priest of Ramjanmabhoomi temple, a makeshift structure at the disputed site in Ayodhya.

Satyendra Das blames the Narendra Modi government at the Centre for the “increased communal acts” by the Sangh Parivar’s constituents. “Politics is an instrument for settling conflicts, it should not be used to create conflicts,” he said. “What the RSS and its affiliates are doing is to produce conflict in society. They know that only by generating conflict can they survive.”

According to Satyendra Das, Hindu scriptures have no place for the kind of conversions being practised by the RSS. “Hinduism does not get strengthened by these activities,” he added. “In fact, these weaken our religion. Only the Sangh Parivar benefits from forced conversions. These acts are political and have nothing to do with religion.”

Ramdineshacharya, who is considered the head of the Ramanandi sadhus of Ayodhya since he has been given the title of Jagat Guru Ramanandacharya, is also critical of the forced conversions. “These acts have started polluting our society,” he said. “They must be stopped immediately by the government.”