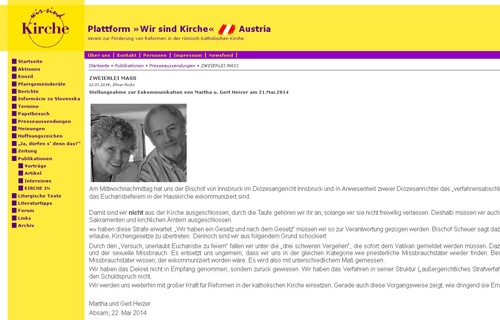 (In the picture) The website of We Are Church Austria with the statement from Martha and Gert Holzer.

Vienna, Austria, May 23, 2014 / 04:31 pm (CNA/EWTN News).- An Austrian bishop has announced that a married couple, including a leader with a dissenting Catholic organization, have excommunicated themselves for simulating a celebration of a Mass.

Bishop Manfred Scheuer of Innsbruck has announced the “self-excommunication” of Martha and Gert Heizer. He cited their announcement of holding “private celebrations of the Eucharist without a priest.”

“I believe that the Heizer couple knew what situation they are causing and what their actions mean for the Church,” he said in a May 22 statement on the Innsbruck diocese’s website.

The bishop explained that the Mass is by its nature “a celebration of the whole Church” and a priest must be present.

Martha Heizer, 67, is a leader with the group We Are Church Austria. Simulations of the Mass regularly took place in the Heizer home.

The Heizers issued a statement saying they believed they had not been excommunicated because they said they belong to the Church through baptism “as long as we do not leave voluntarily.”

They said they would work “for reform in the Catholic Church.”

Bishop Scheuer said that he considers the excommunication “a defeat for the Church” because the couple did not rethink their actions.

“With great regret, I find there has been no rethinking until now by those involved.”