Asean’s authoritarian regimes use virus to ramp up repression 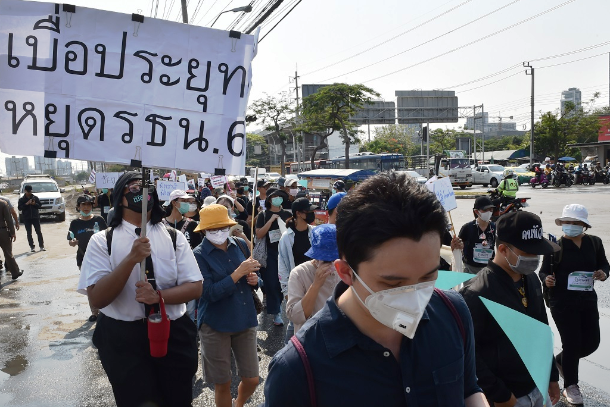 Cover photo: A Thai man holds a sign that reads 'We are tired of Prayut, stop the 2017 constitution' during a demonstration calling for the creation of a new constitution in Bangkok on March 13. (Photo: Romeo Gacad/AFP)

The Ucanews report below shows that China is not the only totalitarian regime in South-east Asia. There are several others in, varying forms, including some so-called democracies. It is an ominous sign which portends that in spite of educational, medical, scientific, artificial intelligence and other advancements in various spheres, life of people in several countries in South-east Asia is being and will continue to be dictated by powerful rulers who have perpetuated their hegemony by making themselves Life-term Presidents / Heads of State.

The other day, Professor Yuval Noah Harari, Israeli futurist and a professor of the Department of History at the Hebrew University of Jerusalem,  took part in an interview on India Today TV on Global Cooperation to combat Coronavirus and future epidemics.  He pointed out some short-term emergency measures being adopted by some governments like China, Israel and others were  surveillance by closely monitoring people’s smartphones, making use of hundreds of millions of face-recognising cameras, and obliging them to check and report their body temperature and medical condition.  By this the authorities can quickly identify suspected Coronavirus carriers, track their movements, identify anyone they came into contact with and warn citizens, through mobile apps, about their proximity to infected patients.  He said the danger was these measures could become permanent and severely compromise a citizen’s privacy in the name providing healthcare. If we are not careful, after COVID-19, deployment of mass surveillance tools might continue in countries that have so far rejected them, more so because it signifies a dramatic transition from “over the skin” to “under the skin” surveillance. Even when infections from Coronavirus are down to zero, some data-hungry governments could argue they needed to keep the biometric surveillance systems in place because they fear a second wave of Coronavirus, or because there is a new virus ….. there will be no dearth of excuses for maintaining surveillance.  He feared these surveillance measures could be used for transition into authoritarian regimes to keep total control on the movements of citizens,  including their inner feelings which might be measured through say, mandatory wearing of Biometric Braclets.

Will similar tendencies be at play through phased extensions of the Lockdown and after it is lifted? Will there be a gradual erosion of the pillars of democracy, namely Judiciary and Media, the fourth pillar? Already there are telltale signs of tinkering with the Judiciary and many say the Media is largely compromised. Only time will tell. Isaac Gomes, Associate Editor, Church Citizens' Voice.

Authoritarian regimes across Southeast Asia have been using the Covid-19 crisis to increase repression and curb freedoms, and they are unlikely to change tack or give up any new “official” powers lightly.

On April 10, Cambodia’s rubber-stamp parliament handed a raft of new powers to its prime minister-cum-dictator Hun Sen, who has ruled the country like a personal fiefdom since 1985, even promoting his children to key senior posts in clear preparation for dynastic succession. In the process, he disbanded the opposition party ahead of the July 2018 election when Cambodia reverted to being an effective one-party state.

But that has not been enough. The new legislation allows the government to carry out unlimited surveillance of telecommunications and to control (even further than it already does) the press and social media.

The government can also officially now restrict freedom of movement and assembly, seize private property and enforce quarantines and the hoary old dictator’s do-anything clause “other measures that are deemed appropriate and necessary in response to the state of emergency.”

Neighboring Thailand held elections in 2019, albeit with an appointed Senate designed to bulk up total representative numbers for the military junta that ruled the country from 2014-19. Unsurprisingly, some political chicanery allowed the dictator, the 2014 coup leader Gen. Prayut Chan-o-cha, to return as prime minister

Concerned about how well opposition parties performed, Prayut took a leaf out of Hun Sen’s book and banned Thanathorn Juangroongruangkit, the popular leader of the rising Future Forward party. Thanathorn may yet end up in prison, just to make sure.

Prayut has bumbled his way through the Covid-19 crisis, eventually playing authoritarian hardball with not just a lockdown but a weeks-long total alcohol ban, only recently lifted after growing popular pressure.

In Myanmar, the increasingly authoritarian civilian government of Aung San Suu Kyi, whose strong suit has never been transparency, has ramped up its war on the media with legislation in early April that penalized health workers for telling journalists about new health concerns, trying to punish people instead of giving them regular reliable information.

The other arm of government, the military which still effectively holds the aces, has continued civil wars in the northern state of Kachin and western state of Rakhine as well as persecution of the largely stateless Muslim Rohingya in the same state.

But Suu Kyi’s National League for Democracy must at least be a bit careful as the country’s five-yearly parliamentary elections are due in November.

In the Philippines, the nation’s church-baiting and media-hating (elected) President Rodrigo Duterte has taken his authoritarianism into new territory. Combined with the usual unbridled threats to “shoot anyone” who disagreed with his handling of the Covid-19 emergency came the dramatic removal of broadcaster ABS-CBN by the country’s media regulator, which claimed that the group’s licence had expired and needed to be renewed by Congress.

Duterte has had an ongoing battle with the independent-minded ABS-CBN, though the decision has rightly been seen as a full-frontal attack on media freedom.

“Duterte’s power over the security forces is based on an old and unsubtle system of patronage normally employed by local clans, mayors and alike. Now that the provincial big boss is resident in the presidential palace in Manila, he has a vast network of people in every institution in the country in his debt. The military has been overtly politicized and, conversely, politics and culture have become increasingly militarized,” Tom Smith, principal lecturer in International Relations at the University of Portsmouth, wrote in The Conversation.

The piece added that Duterte enables both masked assassins on the back of motorbikes and killers in uniform. Duterte’s constitutionally limited single term still has two years to run even if he does exit without a nominated successor taking his place. Just as with the previous dictatorship of Ferdinand Marcos, it is likely to take the Philippines years to repair public trust and legitimacy in the security services that have been so easily co-opted by the president.

Vietnam and Laos already have one-party communist regimes, while Singapore has a more benign one-party state.

The trends in the region are comprehensively tilting in favor of despotic regimes and, at this stage, there does not seem to be any relief in sight