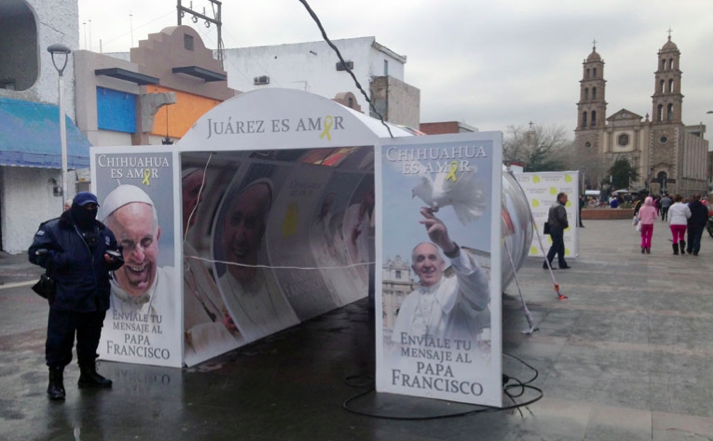 (Note: Why  this breakneck speed journey from country to country on the part of Pope Francis 78, but acting like an agile young man? “Zeal for the house of God consumes me”, it was said of Jesus. Similar to that is his thirst for “A

poor church for the poor”.  It  is the fire that burns within  him from the very start of his pontificate and that drives him like a rocket to places where God’s children are undergoing crushing struggles  for survival, for food, job and habitation. Again, “I have pity on the multitude”, Jesus said, seeing the crowd hanging on to his words without food or rest. Similar  pity drives Francis to places, where the poor of Yahweh are marginalized, oppressed and exploited like the Israelites of old in Egypt. Today’s Pharos are the power hungry politicians in rich and poor countries, who collude with big business cartels to make profit at any human cost. Such a country is Mexico, notorious for its cut throat drug mafia. May the visit of Francis bring good news to the Lazaruses  of Mexico. James kottoor, editor)

As Pope Francis prepares to embark on a breakneck six-day journey to locations across Mexico this week, local church leaders expressed hope he might use the visit to call attention to the crushing struggles faced each day by marginalized communities there.

Perhaps more than anything, said community advocates in two Mexican states, the pope could lend some of his global authority to confirm the difficult realities people live in and to push national and international leaders into taking action to help them.
"Nobody can say to the pope: 'You're wrong. You don't know what's happening here,' " said one advocate in the northern city of Ciudad Juárez.
"Nobody will say that," said Elizabeth Flores, the head of a Juárez diocesan office for worker's concerns. "That papal word is going to be very important."

Jesuit Fr. Pedro Arriaga Alarcón, a diocesan leader in the southern Mexican state of Chiapas, likewise said he hoped the pope would use his bully pulpit to push "the authorities of the state and the city [to] attend to the demands of the people."

Arriaga and Flores are based in two areas Francis will visit in his Feb. 12-17 trip to Mexico.While the pope will spend each night of his visit in the central capital of Mexico City, he will crisscross the nation via airplane or helicopter each day to visit points farther south, west and north.The pope will visit two cities in the state of Chiapas, on the Mexico-Guatemala border, Feb. 15. He will end his Mexican journey Feb. 17 in Juárez, the border city on the other side of El Paso, Texas.

In separate phone interviews, both Arriaga and Flores spoke of severe struggles faced by people in their respective communities and their own frustration at lack of government help in solving systemic social issues.Flores spoke most at length about the situation in maquiladoras, factories where day laborers work on items to be exported outside the country. Her Juárez diocesan office, founded in 2001, provides legal assistance and defense for such workers.

The lawyer and worker advocate said that many of the laborers receive such low pay that they cannot make any sort of financial plans beyond the current day."Nobody can live like that," said Flores. "Nobody can go and live their faith facing all that. And the church has to have a word for that."

Noting that the pope will meet with laborers and employers in one of his last Mexican events during the Juárez stop Feb. 17, she said, "That, by itself, is very important."  "It's not just everybody is there, all the people, with thousands of problems," said Flores. "No. He will talk to, he will have a message to workers. That, by itself, is important."
"That has a very deep meaning," she said. "A lot of people are going to listen. They are going to know what he has to say to the workers." Francis will also visit a local penitentiary in Juárez and celebrate a highly symbolic Mass near the U.S.-Mexico border.While Flores said that she expects much of the focus of the pope's visit to her city to be on immigration issues, she said she thought his desire to meet with workers "means that he has a lot to say about it."

Arriaga spoke most about his work with indigenous people, who by some estimates make up nearly a third of Chiapas' population of about 5.2 million. There are 12 federally recognized ethnicities in the state, and many indigenous people speak only a native language and not Spanish.

Asked why it was important Francis was visiting the state Feb. 15, the Jesuit responded: "Because the indigenous are living in real poverty." "This is a situation of poverty," said Arriaga, who serves as one of seven episcopal vicars for the San Cristóbal de las Casas diocese and is a priest at the parish of San Juan Bautista Chamula.During his daylong Chiapas visit, Francis will celebrate a Mass with the indigenous communities in the San Cristóbal de las Casas diocese and have a meeting with families.

Arriaga said he hoped the pope might use those occasions to address what he identified as local and federal government corruption, and to call for respect for indigenous peoples and their customs."The indigenous, they are not objects," said the priest. "They are people. They are subjects. They can do by themselves. They are going ahead."
After arriving in Mexico late on Feb. 12, Francis is to meet separately with Mexican President Enrique Peña Nieto and the country's bishops Feb. 13 before celebrating a Mass that day at the Basilica of Our Lady of Guadalupe.He will fly via helicopter Feb. 14 to an area just north of the capital, where he will celebrate a public Mass and visit a children's hospital.

After visiting Chiapas Feb. 15, the pope will fly to the city of Morelia, some 200 miles west of the capital. Morelia has been racked by drug violence.
Arriaga drew a line between Francis' expected three visits to Chiapas, Morelia and Juárez, saying each stop identifies an issue that is "very important" for the country.
He said he hoped Francis' visit would encourage the country's leaders to realize they have to work for solutions to national issues "not only with their minds" but also by "putting their hearts with the people of Mexico."[Joshua J. McElwee is NCR Vatican correspondent. His email address is jmcelwee@ncronline.org.)