As Jesus’ birth nears, sadness is ‘not allowed,’ Pope says 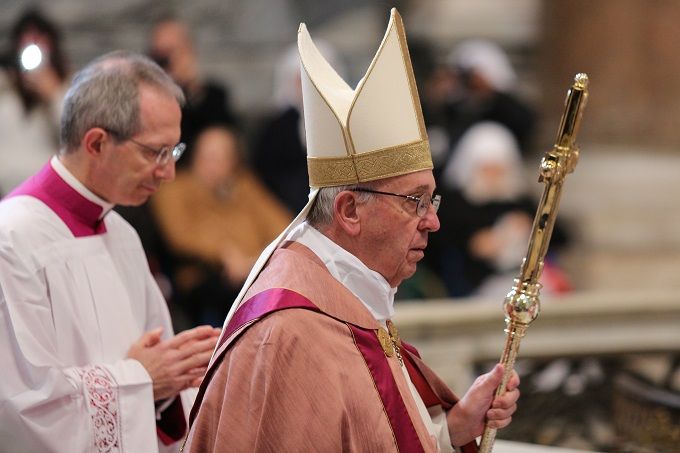 As Christmas approaches, “we cannot let ourselves be taken in by fatigue; sadness in any form is not allowed, even though we have reason to be with the many concerns and the many forms of violence which hurt humanity,” the Pope said Dec. 13.

Instead, the coming of the Lord “must fill our hearts with joy,” he said, noting that God is always someone who protects his people.

In the contest of a history filled with great abuse and violence, especially by those in power, “God knows that he will reign over his people, he would never leave them at the mercy of the arrogance of its leaders, and will free them from all anxiety,” the Pope said.

“Today we are asked not to let our hands grow weak because of doubt, impatience or suffering,” but to place our trust in Lord.

Pope Francis celebrated Mass for the third Sunday of Advent at the basilica of St. John Lateran. The day is often referred to by its Latin name, Gaudete Sunday, which indicates that it is a day of ‘rejoicing’ as the birth of the Savior draws near.

Before celebrating the Mass Francis opened the basilica’s Holy Door for the Jubilee of Mercy. He prayed for a brief moment on the threshold, and was followed through by concelebrants of the Mass, religious men and women and lay faithful.

One of the novelties of Francis’ Holy Year of Mercy is that for the first time Holy Doors have been designated in particular dioceses.

Cathedrals around the world will join the Pope in opening their own Holy Door’s on the same day, Gaudete Sunday. Following the Pope's Mass, Cardinal James Harvey celebrated Mass and opened the Holy Door at basilica of St. Paul's Outside the Walls.

Pilgrims who pass through the door – which is only opened during Jubilee years – can receive a plenary indulgence under the usual conditions.

The opening of the door is meant to symbolically illustrate the idea that the Church’s faithful are offered an “extraordinary path” toward salvation during the time of jubilee.

Francis officially inaugurated the Jubilee of Mercy, and Extraordinary Holy Year, on the Dec. 8 Solemnity of the Immaculate Conception by the opening of the Holy Door in St. Peter’s Basilica. It will close Nov. 20, 2016, on the Solemnity of Christ the King.

In his homily, Pope Francis pointed to the prophet Zephaniah’s declaration in the first reading that “the Lord is near.” Because of this, “we should rejoice always, and with our affability give witness of the closeness and care that God has for each person.”

The “simple sign” of opening the Holy Door is itself an invitation to joy, he said, because “it begins a time of the great forgiveness. It is the Jubilee of Mercy.”

The Jubilee is a time to rediscover the presence of God in the world as well as his fatherly tenderness, Francis said, explaining in off-the-cuff remarks that God “doesn't like rigidity. He's a father, he's tender.”

Pope Francis then pointed to the day’s Gospel from Luke, in which the people asked John the Baptist what they must do to prepare for the coming of the Savior.

“The Baptist’s response was immediate,” he said, noting how John’s invitation to act justly and to look after those in need also extends to each of us today.

While John’s demands were a reflection of what the law already prescribed, “we, however, are prompted toward a more radical commitment,” Francis said.

In looking at the Holy Door they will cross, each person is asked to become an instrument of mercy, “knowing that we will be judged on this,” he said.

A person who is baptized “knows he has a greater commitment,” he observed, adding that faith in Christ “leads to a journey that lasts for a lifetime: to be merciful, like the Father.”

“The joy of crossing the Gate of Mercy is accompanied by a commitment to welcome and give witness to a love that goes beyond justice, a love that knows no boundaries. It is from this infinite love that we are responsible, in spite of our contradictions.”

Pope Francis closed his homily by praying that everyone who passes through the Holy Door, the “Gate of Mercy,” would understand and welcome “the infinite love of our Heavenly Father, who transforms and renews life.”